Lets Review Celtics vs Cavs One More Time, It’ll Be Cathartic I Promise 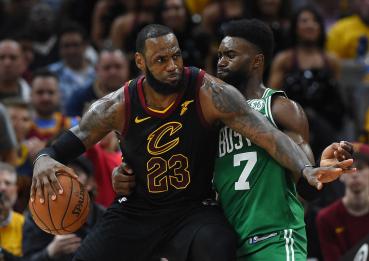 Before I even write one word, I will admit this is all coming from a Celtics fan that just got got by LeBron James…again. So I may not be the most objective person in the world, but, the ball washing of LeBron that we are now witnessing is unprecedented. Its the number 1 reason a lot of people just cannot get on board as a fan of LBJ, despite being a once in a lifetime talent.

It hit its peak during this Eastern Conference Finals. LeBron James won the series with a herculean performance no doubt. In the 2018 playoffs he is averaging 34 points, 9 rebounds and 8 assists. Thats bananas, but going into this series how many people actually picked the Celtics to win while being lead by a bunch of guys in their early twenties?

Lets go to the board! 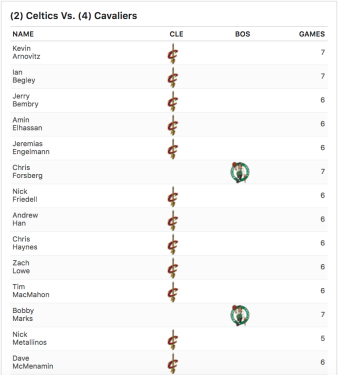 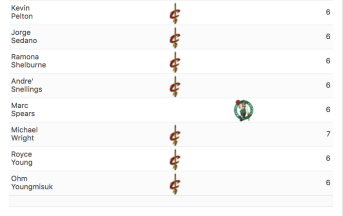 Of the 22 ESPN “Experts” polled, all but three picked the Cavs to win the series, two of whom are Boston writers. And only 5 predicted the series would even go 7 games, so we can’t just turn around now and say it was some miraculous effort that LeBron willed this team to a win after you all picked him to win outright 2 weeks ago.

Hell ESPN said the same exact thing before the C’s played the Sixers too, giving them almost no shot of winning. 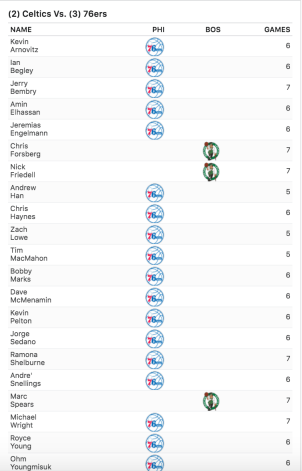 So is this a young underachieving team that got exactly as far as it possibly could? Or is this LeBron the savy vet, the all-time great somehow, some way getting past a Celtics team MISSING THEIR TWO BEST PLAYERS. 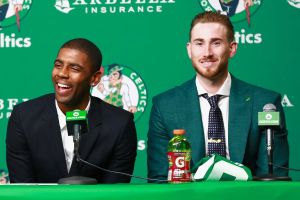 Going into this series no one gave the C’s a shot because they were too young and inexperienced. Then the C’s win the first two to flip the script and put the pressure back on the Cavs. After battling back and winning the series though people are legitimately saying this is LeBron’s greatest achievement ever. The guy who has won three titles and is going to his 8th straight NBA Finals, beating the Celtics WHO WERE MISSING THEIR TWO BEST PLAYERS in 7 games is his greatest feat.

So while most of us still feel like this:

You gotta remember once Kyrie Irving went down we all said if the Celtics can get out of the first round then the rest is gravy. So while this loss stings, I know this team will be right back in it and competing for a title in a few months. This team took LeBron James, the greatest player of our generation, to 7 games on the back of a 20 year old rookie in Jayson Tatum.

Another view of the Tatum dunk on LeBron pic.twitter.com/xSTWcshQ4V

So for the national media to come out as if this is some grand upset for LeBron and the Cavs to beat the Celtics WHO WERE MISSING THEIR TWO BEST PLAYERS is laughable.

Too many people are pointing to the Cavs supporting cast and saying LeBron has no help. Well, first off this is entirely his doing. If LeBron had committed to staying in Cleveland beyond dinner time then this team would be able to build around him with the security in knowing he won’t be jetting this summer. Plus most of these bums that people point to are guys that LeBron the GM forced his team to acquire and overpay for, whether its Tristan Thompson, JR Smith, or even Kevin Love himself. LeBron has forced this team to trade No. 1 overall picks, overpay aging role players, and had such a toxic relationship with a 25-year-old stud in Kyrie Irving that he forced a trade. All of that combined had a Cavs team constantly scrambling and slapping band-aids on a team that was generally building for right now rather than striking a balance and building for the long term. Thats how teams get old and supporting casts get slow. Thats on LeBron so I will shed no tears for that one.

Have we also forgotten the national reaction to the Cavs shaking up their entire roster at the trade deadline? The Cavs were not lighting up the world and Isaiah Thomas wasn’t a great fit so they hit the reset button on their roster and brought in Jordan Clarkson, Larry Nance Jr., George Hill, and Rodney Hood. The national media all said the Cavs were the team to beat hands down after that.

“These moves clearly make them the best team in the East.” — @Chris_Broussard reacts to all the Cavs’ trades at the deadline. pic.twitter.com/3d1EcfOO0k

Now to pretend like the Cavs weren’t always the favorite in the East and this is some grand magic trick by LeBron is just dishonest.

So, no I won’t build a statue for him because his team, who was the favorite to win the series, won the series in 7 games while the Celtics…say it with me…WERE MISSING THEIR TWO BEST PLAYERS.

I must tip my cap to the man though. After torturing him during the early years of his career and chasing him from Cleveland, LeBron has poetically paid the Celtics back year after year. The guy is incredible and as much as he drives me nuts, he is a joy to watch because he’s just that good. Gotta give credit where it’s due, and as Brian Windhorst points out, the guy is money. He may have imploded more when he was younger, but LeBron James just doesn’t choke these days.

“James has won six straight Game 7s over the past 10 years, two of them on the road. He has won seven of the past eight elimination games he’s been in, including three this postseason. And he has now come from 2-0 down to win a series three times in his career. That has happened only 20 times in seven-game series in NBA history.”

We’ll see you guys next year, until then best of luck to LeBron as the Cavs are a -1000 underdog to the Warriors in the Finals. Godspeed.