12Up– Manny Delcarmen, 35, is looking to earn a chance with the Boston Red Sox, mentioning that he is willing to pitch in the minor leagues in order to work his way back to the majors. And he better be. Delcarmen worked out with the Red Sox earlier Tuesday, hoping to earn that second chance.

Nostalgia Alert! Former Red Sox reliever Manny Delcarmen is making a comeback attempt with none other than the Red Sox themselves. The pride of Jamaica Plain. What a throwback. I think the reason I love Delcarmen so much is because he was one of the first top Sox prospects to come along and flourish (and flame out) right when the team was at its best in the mid 2000’s alongside Pedroia, Papelbon, Lester etc. In 2007 when the Sox won it all Delcarmen had a 2.05 ERA in 44 IP with 8.4 K/9. And in 08 when they got to Game 7 of the ALCS (god damnit) he had a 3.27 ERA in 74.1 IP with an 8.7 K/9. Not too shabby.

Obviously Delcarmen didn’t have quite the same staying power as those other guys. But he was at one time the setup-man of the future to the Red Sox closer of the future in Craig Hansen. REMEMBER HIM?! 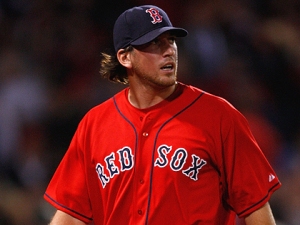 But hey scouts say he’s hitting 92 mph on the gun and he still lives a half hour away from Pawtucket so why not. This is also great for me because my go-to awkward silence icebreaker at parties is “Hey, whatever happened to Manny Delcarmen?” Now we shall see.

PS – I’ll never forget being at the McDonalds in Kenmore Square before a game and seeing a guy rocking a *stitched* Craig Hansen jersey A WEEK after the kid got called up. He was supposed to be can’t miss. Well guess what, he did miss. A friend of mine from high school swears to this day it’s because the seams are lower on MLB baseballs than in college…