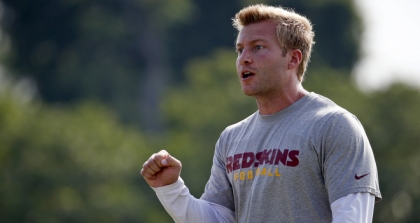 If you wanted to move on from the shit storm that was the Jeff Fisher era AND make a splash in LA, this is how you do it. Hire the youngest coach in NFL history. 30 year old Sean McVay, the offensive coordinator of the Washington R-words, is the new coach of the LA Rams.

Don’t make the mistake of hiring another mediocre coordinator or a guy who’s already been a crappy coach in the past. Inject some new blood, some excitement and a guy who actually has created a great offense and built up a QB in Kirk Cousins. Thats what the Rams needed. God knows Jared Goff needs it. Plus it will be wild to see a guy who looks like a ball boy calling the shots from the sideline.

I *love* wunderkinds, especially in industries that are dominated by old boring guys. Bill Belichick is the best coach in the history of the league and I would take a bullet for him, but he is an old boring guy. If a dude who’s basically the same age as me can succeed as an NFL head coach then that makes all the blood, sweat and tears I’ve poured into Madden over the years all worth it.

It reminds me of when Theo Epstein was named GM of the Red Sox back in 2002 when he was TWENTY EIGHT! Thats insane. I can barely pay my bills at 28 and I certainly can’t balance a check book and he was managing one of the biggest franchises in all of sports at that age.

So yea, I always root for young guys getting a shot in front office and coaching positions, mainly because it just happens so rarely. Hopefully he pans out better than Josh McDaniels first go as a young head coach in Denver, which blew up in less than 2 years.
Sports are tricky because all of the players will be around his age, if not older, so it can be easy for that to become a distraction. It looks like McVay is already doing his best to combat though, surrounding himself with very experienced coaches to counteract his inexperience, which is smart. He just brought on 70 year old Wade Phillips to be his defensive coordinator. A 30 year old head coach with a 70 year old DC is still a hilarious image to think of. That is a can’t miss TV sitcom. Its too bad the Rams were on Hard Knocks last year because I would watch the shit out of that show.