In what has become an annual showcase for Game of Thrones, HBO proved once again the penultimate episode of each season is the one you don’t want to miss with last night’s “Beyond the Wall.” Every year the second to last episode of each season is an absolute gem. Here’s a quick refresher on how GOT never waits around until the finale to drop some bombs. Each season’s penultimate episode:

The show picks up right where we left off last week with Magnificent Seven venturing beyond the wall.

Jon Snow and Jorah have a heart to heart for the first time and its a refreshing moment of growth. Remember Jorah should rightfully hate Jon Snow. Jon’s father Ned labeled Jorah a traitor and essentially forced him to leave his family and his homeland forever. Jon also effectively became Jeor Mormont’s surrogate son whom he passed Longclaw down to after the shame Jorah brought to House Mormont. To top it all off, no Jon’s moving in on his girl Khaleesi. But Jorah doesn’t hate Jon. He respects him for everything he’s accomplished, including earning his father’s respect and earning Longclaw, regardless of what his name is.

In an instance of foreshadowing we see the first animal wight in the form of a zombie polar bear. “Do bears have blue eyes?” one of the Magnificent Seven asks before it all goes down. Thoros of Myr ends up getting ragdolled by a goddamn zombie bear and a few nameless wildlings got axed too. We also learn that The Hound is going to have a hard time serving the Lord of Light and fighting wights since the one thing that kills them most effectively (ya know, fire) paralyzes him with fear.

The group heads further north until The Hound sees the same thing he saw in his vision in the fire, a mountain shaped like an arrowhead. Not long after they stumble upon a lone White Walker and a group of wights like a dead ranging party. Time to initiate the ill advised plan to try and capture a wight and bring it back south.

Of course they all nearly die because this moronic plan shockingly does not go well. They do take out the group of wights with Jon destroying the White Walker with the Valyrian steel sword he nearly gave away minutes before (WTF Jon). Except their POW wight lets out a scream that acts as a bat signal for every other dead soldier in the north and now our heroes are screwed.

The gang gets marooned on an ice island as the White Walkers and their army surrounded them. The only reason they aren’t immediately killed is because the thin ice breaks and the dead aren’t exactly fond of swimming. So now we play the waiting game. Just waiting for death to come, figuratively and literally.

Jon opts to use one of his 3 lifelines and sends Gendry to phone a friend.

Tyrion tries to advise Khaleesi on a number of things in this episode such as what’s the plan of succession if she were to die? Khaleesi is not a fan of the conversation and says they’ll discuss it when she wears the crown, which could be a bit of grim foreshadowing we all look back on. But specifically he once again advises Khaleesi again risking her own life to rescue Jon Snow, Jorah and the others. In a direct response to the recent failures she’s experienced following Tyrion’s advice while simultaneously directly heeding the late Olenna’s advice (“Be a dragon”) Khaleesi says enough is enough and rides north on the back of Drogon.

Enter Khaleesi (if you can accept White Walkers but you can’t accept faster than normal travel I don’t want to be your friend) and her 3 gigantic dragons who just start flame throwing the entire place. It seems like the dragons really are the end all be all of weapons in the 7 Kingdoms, but similar to the Loot Train scene from a couple of weeks ago we once again see just how powerful yet vulnerable the dragons are at the same time. 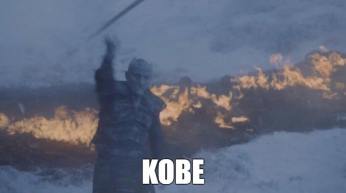 The Night King takes his ice spear and just rifles it into the sky as Viserion gets tagged and falls from the sky while bleeding uncontrollably. I think this was the saddest I’ve been watching a TV show since Jack had a nervous breakdown about leaving the island on LOST.

The look Jon Snow gives the Night King had me thinking this is it for our boy, he’s going to go out in a blaze of glory trying to take out the head White Walker. As he tells Khaleesi to go he battles a few more wights before falling through the ice, which is the second time in three episodes the show runners have teased a major character drowning.

Shockingly, Jon does not in fact drown, but there is still an army of dead 50 feet away. This would be a pretty anti-climactic way to die so suddenly half-dead Uncle Benjen rides in out of nowhere on his horse to save Jon Snow’s ass and then sacrifices himself. Why couldn’t Benjen get on the horse and ride away with Jon too? As Michael Bay once said to Ben Affleck after Ben asked wouldn’t it be easier to just teach astronauts how to drill rather than the reverse? Shutup, Ben.

After surviving and making it back to the wall the team loads Jon up on the ship back to Dragonstone and we have a real moment between Khaleesi and Jon. Her dragons are not just pets to her, one of Khaleesi’s children just died, which is what makes it all the worse that they died helping Jon. So we see Khaleesi have the first real crack in her armor in years as she nearly breaks down sobbing mourning her dragon.

In a show of faith in her as a true leader and probably also a vague marriage proposal Jon tells her “You are my queen.” Jon bends the knee, well figuratively, since he’s on his deathbed once again.

Its the first time we have the North truly following a Targaryen since the Mad King. Jon doesn’t care what his people will say, he knows Khaleesi is the Queen they need. Now whether, Jon will be her King or not remains to be seen. But for now, they are allies at the very least.

Also, in addition to the Jon’s knife wounds on his chest courtesy of the Night’s Watch, he suddenly has blue marks on his chest. Is this just the frostbite and remnants of nearly drowning in ice cold water or is it something more? If you look at Benjen (RIP) closely, his face has the same blueish hue after he apparently fought off death and a transition to a wight. We don’t really ever learn a ton around Benjen’s story and what really happened (and we probably never will now) but has Jon been touched by something? Or is this just me looking too deeply into a show that has prided itself on deep, deep world building? I digress.

In the Den of Geek breakdown they also pointed out something interesting about this scene as well as everyone’s transportation home.

“It’s a moment so romantic that Dany even finds the scars that prove he was stabbed in the heart endearing. Jon appears to truly be hers, and hey he still tellingly didn’t ride Drogon with the rest of his comrades… he has his father’s namesake, Rhaegal, to look forward to mounting.”

So that is an interesting bit I thought. We still have yet to see Jon Snow on a dragon, even though all his crew has now been on one. And Khaleesi has only ever ridden on the back of Drogon. So is Rhaegal keeping his back for the one true king, Jon Snow?

The whole Sansa/Arya sister rivalry just took a dark twist as Sansa stumbles upon Arya’s bag of faces and realizes her little sister might be an even bigger psychopath than she thought. Arya all but threatens Sansa’s life and now we have the strangest power struggle I can remember on this show. It seems a little convenient writing as I would like to think after years of surviving older, more experienced foes and politicking all through the 7 Kingdowns (and Essos) that these two would be able to understand whats going on here. Imagine taking the transcript of an AIM chat you had when you were 14 and using that as hardcore, stone cold evidence of your character as a person years later? 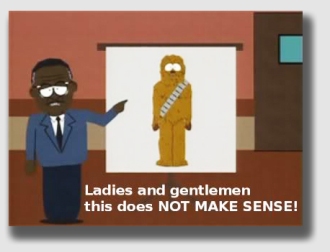 Either way, Sansa is spooked about Arya either killing her or actually convincing the other northern lords that the words a 14 year old girl wrote, under durress, prove she is a traitor. Sansa fears losing her head as well as her role as ruler of the North.

So naturally she sends her sworn protector Brienne of Tarth to Kings Landing, which reeks of Littlefingers, well, finger prints. Was there actually a raven summoning her to Kings Landing or does Sansa just want to get Brienne out of Winterfell in case she needs to off Arya? Brienne is after all sworn to protect both of Catlyn Tully’s daughters, so if Sansa needs to axe Arya she doesn’t want anyone there to stop her. My question is though, as Sansa, the one without a single day of combat training, wouldn’t you be more worried about Arya killing you? Wouldn’t you want a bodyguard with you now more than ever? This story line just gets odder and odder.

At the end of the episode we see the army of the dead pulling Viserion up from his icy grave to be resurrected. Enter the ice dragon. The Night King’s wight dragon. Something else that Den of Geek speculated on is that maybe the reason the Night King and the White Walkers were simply waiting for the ice to freeze so they can attack Jon and his gang wasn’t just exposition allowing Khaleesi enough time to get there. Maybe the Night King knew Khaleesi was coming with her dragons and he was legitimately waiting for her. Waiting for her to come into his arena so he can down one and claim a dragon of his own. A much more satisfying and chilling explanation to that entire scene. Because we all know the White Walkers and the wights can’t break through the Wall. But what if the Night King had his own damn dragon to simply fly over the towering ice monstrosity of a wall? Or maybe they make good on the Season 7 opening credits and simply walk around the wall over the frozen ice. Either way the big baddie now has a dragon of his own which is downright frightening.

Next week we have the most tense meeting of the UN ever created. What traps and tricks can we expect in the 90 minute season finale? Did we really risk so much, getting Viserion (and Thoros!) killed just for one wight?

That whole sequence better actually have been worth it, but I’m not too optimistic. I don’t expect Cersei to suddenly care about some existential threat (real or not) because she is so single-mindedly focused on keeping the Iron Throne she will do whatever it takes to stay there. Even if it means her own demise. We’re running out of time though for everyone to be fighting two battles at the same time, so someone is gonna have to either shit or get off the pot. Next week could be the last we see of Cersei.

One more episode guys and then the Long Night truly does begin because god knows how long it’ll be until the 8th and final season of Game of Thrones.