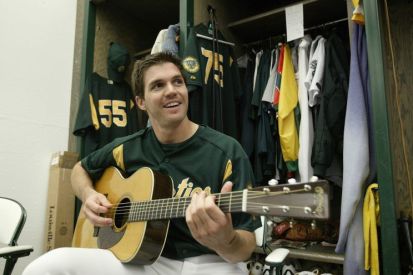 Yahoo – The former pitcher for the Oakland Athletics and San Francisco Giants has fully transitioned from a life in baseball to a life making music (he released his first EP of six songs back in January, and it reached No. 39 on the Billboard country chart),..Oh, and he laid down this blazing hot personal take on his post-baseball life. “I think I’m just genuinely more in love with what I do now than I probably ever have been.” That’s a bold statement for a guy who won a Cy Young award, went to three All-Star Games, and won some very important postseason contests — including a World Series game that led to a ring. But Zito’s career had a lot of ups and downs. He was left off the 2010 postseason roster, and that Giants team went on to win the World Series. He had some bad years, and didn’t pitch at all in 2014. Then he spent most of 2015 pitching for the A’s Triple-A team in Nashville.

Barry Zito is without a doubt in the Hall of Fame for mailing it in. This is a guy who had a couple of DOMINANT seasons for the Oakland Athletics, won a Cy Young in 2002 with that absolutely filthy curveball.

Then he cashed IN with a $126 million contract from the San Francisco Giants. In 2006 Zito’s deal was the largest contract for a pitcher ever (LOL David Price got $217 million 10 years later). Zito then almost immediately turned into a colossal bust, never lived up to the hype and ultimately became a bullpen guy for the Giants.

Which is gross to type because the Red Sox were apparently the runner ups for Zito and are now basically living out the same exact situation a decade later. Highest paid pitcher ever, underwhelming performance etc.

But anyways, with Zito he always seemed like a total surfer dude who just happened to be really good at baseball. Like if Johnny Utah hadn’t blown out his knee and went on to NFL stardom.

So towards the end of his career Zito was always seen playing the guitar all while shitting the bed as he backed his way into the last few years of his historic contract. In 7 seasons with the Giants he never ONCE had an ERA under 4 and had an ERA over 5 three times. Yuck, indeed.

Well good for that dude for doing what he loves and chasing the dream, not the money. Ya know, after already banking $100+ million dollars. Guy Moneyballed his way to the top. Respect.