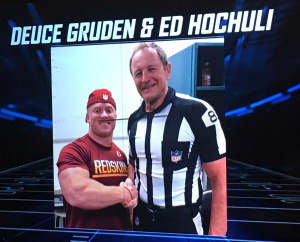 Yahoo -Deuce Gruden is the son of Jon and the nephew of Jay, the coaches of the Oakland Raiders and Washington Redskins. He was part of the Redskins’ strength and conditioning staff. And even on an NFL sideline, Deuce Gruden stands out. He’s a powerlifting champion, and looks capable of bench pressing any player on his team. Even the linemen. Gruden was on the Redskins’ strength staff and it’s no surprise that he left Uncle Jay to go be on his dad’s new staff with the Raiders. Matt Schneidman of the Mercury News had the story.

Somebody get Ryan Seacrest on the line and get these two a reality show IMMEDIATELY. Can you imagine that? It would be A+, must see television. The only reason I think they don’t do it is because it would put the Kardashians ratings in the toilet. Hey, as Gary Vaynerchuk always says, you need to always be thinking of ways to put yourself out of business so somebody else doesn’t do it for you. Pull the trigger.

I’m just picturing the 5’5″ 300 pound Deuce hulking out on the sideline when some panzy can’t finish a tackle because he’s been slacking on his squats. Throw in Chucky and Mark Davis?

Holy hell, I’m getting excited now. What would you even call it?

Chucky and the Deuce: Road to Las Vegas.