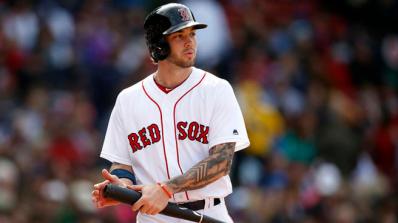 NBC Sports Boston – Blake Swihart has spent all season in a virtually non-existent role, one that Alex Cora and Dave Dombrowski both indicated on Tuesday will not change barring injury to Sandy Leon or Christian Vazquez. Swihart’s agent, Brodie Scoffield of The Legacy Agency, sees a situation that’s been unproductive for both the player and the team, and has asked the Red Sox to trade Swihart…Swihart earlier in May said he would leave the trade topic to Scoffield. Scoffield declined to comment at the time. Now, with more than a quarter of the season completed and Swihart still serving no purpose other than “protection for us as a third catcher,” as Dombrowski put it Tuesday, Scoffield is pushing for change.

“With Dustin Pedroia returning, it seems now would be the time to make a move with Blake,” Scoffield said.

I can’t say I’m surprised and I absolutely don’t blame the guy. He was once the top rated catching prospect in all of baseball and then the Red Sox stuck him in left field where he jacked up his ankle and derailed his career.

Here’s what MLB.com had to say about Swihart in January 2015:

“Catcher Blake Swihart, who continues to impress with his consistent approach at the plate and his skills on the defensive side, is ranked No. 18. Though he didn’t become a regular catcher until 2010, Swihart is now the game’s top prospect at the position, reminding many of a young Buster Posey.”

Now he’s the 3rd catcher and the 25th man on a Red Sox team that rarely even plays him. Since he’s out of options the Sox can’t send him down to Pawtucket without the risk of another team claiming him and the Sox aren’t going to risk losing him for nothing so here we are. Blake is stuck in no man’s land. A trade is probably the best result for both sides. As much as I’d like to just see the team start playing him, Christian Vazquez is dynamite defensively and Sandy Leone seems to have settled in as Chris Sale’s personal catcher so there’s not a lot of playing time to go around. Those two have been positively radioactive offensively though so why Swihart hasn’t gotten really any playing time is beyond me.

You would think playing outfield is completely out of the question after what happened last time and with Dustin Pedroia coming back from the DL soon there will be even less room in the infield. He could DH but he’s definitely third in line behind mashers like JD Martinez and Hanley Ramirez for that role.

So we may be seeing the final days of Blake Swihart in Boston. I hope he goes somewhere and gets the opportunity to play because the Red Sox have royally fucked up his career to this point. Who knows if he goes the way of other former top catching prospects like Jared Saltalamacchia (spelled that right on the first try, NBD) and sucks or if he goes on to be an excellent catcher for the next decade. But lets see the guy play somewhere else if not here. Because a 3rd string catcher who doesn’t really play any other position well is not a great depth option on a major league roster. The 25th man on a roster should be a super utility player who can play basically anywhere on any night. Maybe the Sox get a decent reliever in return for Swihart and kill two birds with one stone. Either way, it seems like its probably time to cut bait. We hardly knew ye, Blake.