This is a headline that seems to be repeating itself over and over again like we’re in the damn Matrix. American League team x adds a weapon for the stretch run, Red Sox do nothing. The Indians added Brad Hand, the Yankees added Zach Britton, and the Astros continue to be on the hunt for bullpen arms with a deep farm system to deal from. Of course this all stems back to Dave Dombrowski absolutely gutting the Sox farm system. 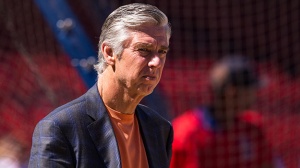 Now those trades were made to acquire Craig Kimbrel and Chris Sale, which have worked out pretty well, but this is why I am pro-prospect. Big Z and I argue about this constantly on The 300s Podcast. He wants to dish prospects all day every day because most of them don’t pan out, which I understand. But in my opinion, prospects are more about their perceived value than their actual intrinsic value. They are poker chips. Some of them turn into Mookie Betts, others fizzle into Casey Kelly. So, no you can’t hold onto all of them, but to trade away so many of your top prospects in 2 years is just risky.

This is why the Drew Pomeranz trade still bugs me. The Sox traded Anderson Espinoza, who was their top pitching prospect, straight up for the NL All-Star, who was in his first year as a starter and known to have injury issues. In 2+ seasons with Boston, Pomeranz has posted ERAs of 4.78, 3.84, and 5.70 this year.

Now Espinoza actually pitched pretty poorly in the Padres system before blowing out his elbow in 2017, but thats besides the point. I wasn’t against trading Espinoza because I thought he was the second coming of Pedro, I was against trading our top pitching prospect (and No. 73 prospect in all of baseball in 2016 after his first pro season) for a guy with an injury history (which the Padres’ GM was suspended for lying about) and a minuscule track record of success. Espinoza was a blue chip prospect and should have gotten a better return.

This is also why I’m always hesitant to trade from pitchers from the NL, unless they are studs with a pedigree because jumping from the NL to the AL East almost always adds a run onto a pitchers ERA. In the first half of 2016 with the Padres, Pomeranz had an ERA of 3.15, which ballooned to 4.78 for the Sox in the second half. Not impressed, Dave.

The Sox are an offensive juggernaut this year with a Cy Young candidate ace, pretty good starting pitching behind him, and a dominant closer. Outside of Kimbrel though their bullpen is a high wire act every night. So now the Sox, one of the best and most expensive teams in baseball, can’t make a deal for a Snickers bar because their farm system is full of JV players.

If they bow out early in the playoffs yet again because their bullpen implodes then Dombrowski should absolutely be on the hot seat. The guy who comes into town with his beautiful lettuce and does nothing but trade away top prospects and sign the highest price free agents hasn’t proved anything to me since he got here in 2015. Tony Mazz laid it out pretty well in this article from the other day. Not to mention, the biggest knock against Dombrowski over the years has been his inability to build a great bullpen. Great…

This team as currently constituted will not win a World Series, especially not with their direct competition adding weapons like Zach Britton right in their face. But, I don’t know what the Sox can really do aside from picking someone off the scrap heap and hoping to catch lightning in a bottle like they did with Doug Fister last year. If this team doesn’t make a significant move, wins 100+ games, and gets bounced in the first round again then someone needs to get fired.