Breaking: LHP Chris Sale and the Red Sox are close to an agreement on a contract extension https://t.co/YjJhMXbmQe

Chris Sale’s deal, if completed, is likely to be in the five-year, $150 million range, league sources tell ESPN.

I love this move for the Red Sox. Granted Chris Sale has had his injury concerns the past two seasons, he has still been hands down the best pitcher on the roster and a Cy Young front runner the past two seasons. David Price turned things around last year and was excellent in the ALCS and World Series, but I would still feel a whole lot more comfortable with a savage like Chris Sale as my ace on the mound. 5 years $150 Million is a bargain at this point too, which speaks to Sale preferring comfort over maximizing every last dollar, which is even more impressive having been on team friendly deals his whole career. Sale hasn’t been shy about telling people how much he loves playing in Boston so this deal makes a ton of sense for both sides. Assuming he stays healthy its a steal for the Sox, but if he does get hurt a 5 year contract won’t totally sink the team like an 8 or 10 year deal would.

Just 8 days shy of his 30th birthday too so the Red Sox can stick to their “we don’t sign pitchers over 30” shtick too if they want, which as we all know lost them Jon Lester. Win win for everyone! 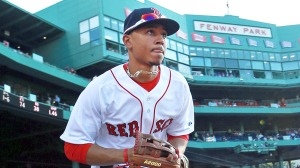 I do think this brings us one step closer to the end of the Mookie Betts era in Boston though. The timing is just too perfect. Maybe the Sox saw the recent deals signed by Bryce Harper and Mike Trout, made one last pitch to Mookie, got rejected and turned to the next guy in line due to get paid; Chris Sale. If you believe the reports the Sox have tried to negotiate long term deals with Betts in the past including an 8 year $200 Million offer last year that he turned down. Now with Trout signing a 12 year $430 Million extension just the other day you would think thats what Mookie will be looking for, assuming he keeps up his MVP-level performance over the next two seasons.

I would think the Red Sox could realistically have three $30 Million players on their roster. David Price is one (albeit the first year of Mookie’s new deal would be the last year of Price’s contract), this new contract would make Chris Sale two, and then the Sox would likely need to pick between Mookie and Xander Bogaerts. I just don’t see this team paying Xander $200+ Million and then Mookie $400+ Million.

So the Sox can go one of two ways: double down on the next two years and maximize your time with Mookie, Xander, Chris Sale, David Price, JD Martinez and co. or privately admit that you have no intentions of paying Mookie half a billion dollars in the near future and sell high for a boatload of prospects. This is the Boston Red Sox though so I can’t see them trading away a homegrown MVP player in his prime because they’re worried about footing the bill. And its not my checkbook so I’ll be fine if they extend him tomorrow, but I would probably be wary of signing a 5’9″ 180 lbs guy with two 30 HR seasons under his belt to a $400+ Million contract. He’d still only be 28 when he hits free agency in two years, but a 12 year deal puts him into his Age 40 season and I don’t want any part of the back-9 on that deal for any player.

I think we all know which direction Dave “trade every prospect who ever sniffed a Top 100 list” Dombrowski is going to lean though. We’re riding this baby into the ground so hopefully the Sox can reel off another World Series or two before Dealer Dave rides off into the sunset.