If the Red Sox Trade Xander Bogaerts, We Riot

Per @JonHeyman, there’s a 20% chance Xander Bogaerts is traded before Monday and a 25% chance J.D. Martinez is dealt.https://t.co/0vcrf0phFu

There have been more and more rumors circulating that the Red Sox are at least entertaining the idea of trading their best all around player. In the midst of their worst season in decades, the Sox are looking for any and all avenues to rebuild and reload. This ain’t it.

If the Red Sox punt on this season I’m ok with that because I understand the legitimate need for a bridge year every now and then. It’s something Theo Epstein was adamant about in “Feeding the Monster.” You can’t be good every single year. Even the Yankees adopted this soft reset approach over the past few years to extraordinary (regular season) results. You need to take a step back and reload every once in a while otherwise you’re going to trade all your assets and overextend yourself on overpriced free agents and then you’ll have to do a hard reset. Kind of like what they’re staring at right now. 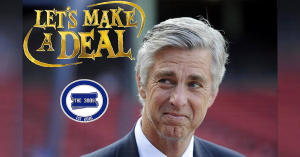 You saw the full value of the bridge year in 2006 when the Sox were less than two years removed from a World Series title but were coming off getting swept in the 2005 ALDS (thanks Tony Graffanino). Despite winning 95 games in ’05, the Sox recognized they were further away from winning a title than their record reflected. So rather than just double down on an aging core they took a step back and acquired some young talent like Coco Crisp and some veteran placeholders like Mark Loretta until the next wave of prospects like Dustin Pedroia (2007 Rookie of the Year), Kevin Youkilis, Jonathan Papelbon, Jacoby Ellsbury, and Clay Buchholz were ready to truly flourish and/or take over full time. It paid off. In 2007 the Sox recognized they were ready to compete again with a combination of their veteran core (Manny, Ortiz, Varitek, Schilling, Nixon), the aforementioned infusion of young (cheap) talent, and some new acquisitions. So they went all out ahead of the 2007 season and signed JD Drew to a (at the time) massive 5 year $70 million deal as well as Daisuke Matsuzaka to a 6 year $51 million deal (plus the $51 million posting fee). The result? The Sox were the wire to wire best team in baseball winning 96 games and the AL East en route to their second title in 4 years. Yes, the Sox did trade one of their top prospects in Hanley Ramirez for Josh Beckett and Mike Lowell before the 2006 season, but Beckett was only 26 at the time and was the anchor of their rotation when the team went for it all in 2007.

The Red Sox have the opportunity to do the same thing here, but if they elect to trade Xander Bogaerts they’re not just punting on a season; they’re removing the core of their rebuild. Why trade a 27-year-old shortstop who just re-signed on a team friendly deal (6 years, $120M) through 2025 and finished 5th in MVP voting last year?

Why trade a guy that you scouted, signed at the age of 16, developed into a player that is just now hitting his prime, is a 2x All-Star, is a 3x Silver Slugger, and became a vital piece of two World Series titles? Yes Bogaerts has a full no-trade clause kick in after the deadline this year, but these are typically the kind of guys you want to build around.

This is not the same as Mookie Betts. Mookie Betts wanted a contract that quite literally was 3x the size of what Bogaerts re-signed for last spring. Mookie was in a walk year and was noncommital about even wanting to be in Boston, whereas Xander re-signed early. The irony is that despite Mookie’s career WAR doubling that of Bogaerts, you’d probably get a better return for Xander because he has 4+ seasons left on his contract. Doesn’t mean you should do it though.

I am a full blown prospect fanatic so while it obviously paid off in 2018 I never loved Dave Dombrowski’s M.O. of ripping apart the farm system. So I understand the value of Bogaerts and the return the team could get, but if you trade him you basically are putting all your chips into the middle of the table and banking on TBD prospects, Rafael Devers, and Alex Verdugo. Not something I want to bet the next 5-10 years of the Red Sox on.

Obviously Boston’s farm system is not ripe with future All-Stars like the ’06 team was, but thats the best part about currently being on pace for the worst winning percentage in team history; you are in play for the No. 1 overall pick. The Red Sox have never had the first overall pick in the history of the MLB draft. That’s value right there. Combine that with some smaller deals like you’re seeing with Workman and Hembree getting dealt and potentially trading guys like JD Martinez who I love, but is 33-years-old and may be the only valuable asset you have. There’s also Andrew Benintendi who I would have thought unthinkable to trade at the start of last season, but he has seemingly taken a plummet in his development the last two seasons. If the rumors are true and the Sox could get a young, promising starter like Mike Clevinger or Zach Plesac, I’d strongly consider it.

It’s time for Chaim Bloom to make the smart, unheralded moves that the team brought him here to do. Blowing it up and trading a player that is essentially your captain is not the way to go. Don’t forget, the Sox also have Eduardo Rodriguez and Chris Sale returning to the mound next year. So use the Theo blueprint; take the bridge year, but don’t blow up the damn bridge.