Now THAT Was a Game 7

Now that was a goddamn Game 7. That my friends is what we in the business call an emotional roller coaster. Isaiah doing Isaiah things, Marcus Smart coming back from the dead to hit a couple 3’s and play his usual ferocious defense, and of course Kelly “Maple Jordan” Olynyk.

Seriously, holy shit, the awkward Canadian 7 footer just carried the Celtics to the Eastern Conference Finals with 26 points off the bench in Game 7. The guy was all awkward euro steps and scoop shots while consistently draining the 3 ball all night.

I have to admit I have given Olynyk my fair share of shit this season so I did not see this coming. I don’t think anyone did. Danny Ainge hoped for it, if only to get a 1-day reprieve of people reminding him he drafted Oynyk over this guy:

Giannis Antetokounmpo. The Greek Freak. But I digress.

Celtics were up, they were down, leading by double digits late in the fourth, only to see the Wizards claw back on the shoulders of Bradley Beal. Seriously Beal is an absolute baller who was putting the fear of God in me down the stretch. That guy can hit from just about anywhere. No thanks to John Wall, who seemingly used up all his turbo power in Game 6 because he ate a dick down the stretch shooting 0-11 over the final 19 minutes.

Officially starting to get worried about the way this game is going. The Wall Beal combo is relentless.

I nearly smashed my TV.

Got the goaltending call so its fine, but Jae, my man#Celtics #Wizards #Game7 pic.twitter.com/bLsBvN8wUj

But thats what great teams do, they fall down and then they pick themselves back up.

What I look like playing rec league ball at the Y. #Celtics #Wizards #Game7 pic.twitter.com/60TctN7iUp

And not to mention WE GET THE NBA DRAFT LOTTERY TONIGHT (Thank you Brooklyn). I feel like a kid with one Jewish parent and one Catholic parent and I get to celebrate BOTH Hanukkah AND Christmas. The best of both worlds. On back to back nights. Unless the Celtics get fisted by the ping pong balls again. Hell, even Markelle Fultz wants it to happen. 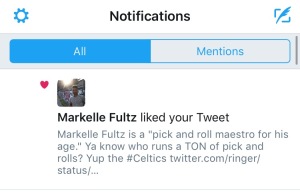