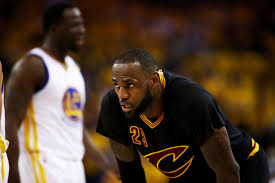 Yahoo – In a sense, if Cleveland Cavaliers superstar LeBron James is frustrated by the 2017 NBA Finals, his search for how the Golden State Warriors became so darn indestructible should really begin within. Unable on his own to topple the late 2000s Boston Celtics — a contender forged by trades for Kevin Garnett and Ray Allen in the summer of 2007 — LeBron left the Cavs in 2010 to replicate a super-team blueprint alongside incumbent Dwyane Wade and fellow newcomer Chris Bosh on the Miami Heat…Though Durant says he did not consider James’ precedent, he readily admits, “He paved the way.”

LeBron must have thrown a fucking fit when he saw this quote from Kevin Durant. Recent quotes from LeBron have made it seem like he’s already resigned to his fate because the Warriors are just more talented. Oh you don’t like stacked teams beating up on you? Well you started the trend homie. Its actually pretty funny when you think about it. As much as I hate the trend of AAU buddies teaming up and building super teams, Durant’s right; LeBron set the precedent.

“You crossed the line first, sir. You squeezed them, you hammered them to the point of desperation. And in their desperation, they turned to a man they didn’t fully understand.”

After reading that story, this Alfred quote from the Dark Knight is the first thing that popped into my head. It’s dead on. Like when Batman took down most of the Gotham underworld he set a new precedent for criminals and they kicked it up another level by bringing in the bat shit crazy Joker. LeBron is basically Batman in this situation with the rest of the league being the Gotham mob bosses, which is a sentence I never thought I’d write.

“You spat in the faces of Gotham’s worse criminals. Didn’t you think there might be some casualties? Things were always going to get worse before they got better.”

The NBA is essentially a copy cat league. If you can’t beat em, join em. 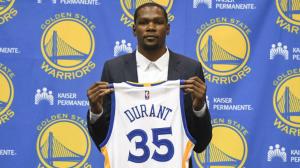 Now Durant is basically saying, “Cry me a fucking river. It’s time for KD to get his shine.” I just really hope this doesn’t become a goddamn blueprint for future superstars. Get drafted, make your team title contenders every year without quite winning one, jump to the path of least resistance to win a ring or two, then come back to your original team to play the savior card. Because that, my friends, will get old reallll fast.

And, yes I realize I make far too many Batman references in my ramblings about sports. Deal with it. The Bat Man is the goat.