Maybe its just Baker Mayfield being like Johnny Football-lite and filling the massive Manziel void in my life, but I’ve recently developed a college football addiction.

Not a ton of people around here are big college football guys, probably because we’ve had ONE good year of college football in Boston since the 80s. Back in 2007 Matt Ryan was at Boston College and they got as high as No. 2 in the AP Poll. 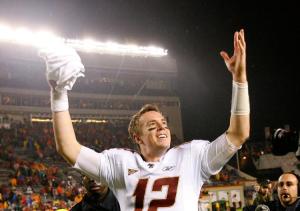 That was fun as hell because it was the first time BC had been ANY good since the days of Doug Flutie. After Matty Ice moved on to the NFL though BC went right back into the tank.

So its hard to have a lot of love for a sport thats basically nonexistent in your market. With legitimately every major team in this city being so good (all having won a title since 2008) theres no time for shitty teams, especially shitty teams that have no intention of bringing in the players necessary to be any good. Kind of like being a Mets fan.

If I wanted to get in my car and drive to a big time college football game, I think the closest team would be Penn State; a cool 7 hour drive from Boston. Fuck you, UConn and UMass do not count, neither does Syracuse. I’m talking BIG TIME college football where they sell out 70,000+ seat arenas. It just does not exist up here. 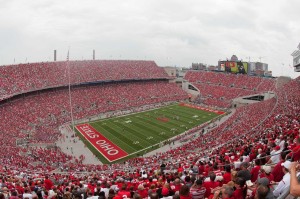 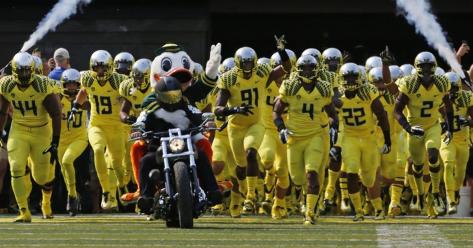 It was right at the start of the Chip Kelly era too so it was perfect timing to get into and follow a team that was actually good at playing football unlike BC. Not to mention a couple of trips (read: losses) to the National Championship and then Marcus Mariota later wins the Heisman in 2014 and I’m pretty invested in the Ducks. I still wasn’t about to sit down and watch college football all afternoon though.

But I think I reached that turning point this past Saturday. It was the first big weekend of the year with some prime matchups. I know CFB kicked off the week before, but this past Saturday we had Oregon vs Nebraska, Louisville at UNC, Georgia at Notre Dame, Auburn at Clemson, Oklahoma at Ohio State, Stanford at USC, and if you’re a real night owl type degenerate, the triple OT #Pac12AfterDark thriller in Boise St at Washington St.

Long story short, I found myself watching college football on the couch for 8 hours straight. There’s so many great characters this year led first and foremost by Baker Mayfield, who took down Ohio State almost singlehandedly on Saturday.

Y’all should’ve known Baker Mayfield was that dude when this hit the internet pic.twitter.com/tnnPKYTkbb

Maybe its something that is just fresh in my mind after a particularly lousy Week 1 in the NFL, but the majority of these college games are always exciting with the added benefit of projecting who would be a good fit where in the NFL. Sam Darnold or Josh Rosen on the Jets is not something I look forward to.

But also, just getting to watch the Heisman Race from Day 1 and witnessing all the big signature moments these guys need in an effort to win the trophy is exciting as hell.

You got comeback bids with insane catches.

You got former NFL quarterback dopplegangers.

College football, I get it now. Which is a problem since I also just spent 10+ hours watching NFL Football on Sunday, getting my money’s worth from Sunday Ticket. So this could devolve into an incredibly sedentary lifestyle quick.