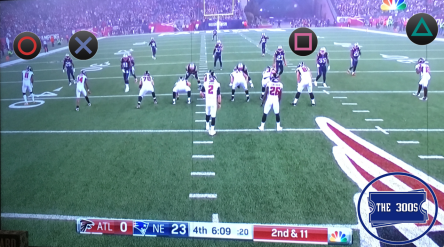 The fog came into Gillette fast last night and after a while you really couldn’t see a damn thing on TV, which must have sucked for the poor sap who dished out $200 bucks to sit in the 300s and couldn’t see shit.

As soon as NBC switched to that Sky Cam angle though I got a sudden rush of dopamine and I had no idea why. This new camera angle they finally switched to after an hour of trying to watch the game through the clouds just seemed right. And then it dawned on me. This is Madden. This is the same angle I’ve been playing football with for 15 years. This is the view I had when I first learned what Spider-2-Y-Banana was, or just how many clickers I could get my roommate to smash by running the perfectly timed HB Screen. Spread em out and go No Huddle for an entire game. This just feels right. NBC, do yourself a favor and get this angle worked into every game as much as you can. Subliminal advertising at its finest because right now I am jones-ing for some Madden.