After yet another Patriots comeback and an epic Eagles beatdown in Philadelphia the matchup for Super Bowl LII is set. For the Patriots, the Blitz for Six is fully on.  For the Eagles, it’s a chance to cap off a Cinderella run with a back-up quarterback as they look to claim their first Super Bowl championship. Now that I’ve had a a few hours to digest both games from yesterday, here are a few thoughts from championship Sunday.

Like Belichick said, Brady’s injury didn’t require open-heart surgery but you wouldn’t know it by the way the team talked about it during the week. Especially with Brady wearing Hamburger Helper gloves to his Friday press conference and telling reporters “we’ll see” when asked if he would play. As a Patriots fan I understand the need to control the flow of information to prevent the opponent from gaining any advantage, but this smug routine does get old at times. I can’t blame the rest of the country for getting sick of it.

Back to Brady, he looked great yesterday. Even with the early deficit Brady looked great out of the gate. He completed 26 of 38 passes for 290 yards, two touchdowns and zero interceptions. The zero interceptions stat might get underplayed this week. Despite his better than 3-to-1 TD-to-INT rate during the regular season, it’s just better than 2-to-1 in the postseason. The first two games of this postseason might just be the best two games he has ever had to open a postseason.

Danny Amendola Is A Playoff Beast

Can’t disagree with Dion Lewis. It’s hard to think of another player who has upped his game in the playoffs as much as Amendola has. While certainly a good player, he’s never been selected to a Pro Bowl. In 111 regular season games Amendola has averaged 3.8 receptions per game, 37.0 yards per game and has scored 19 touchdowns. In 12 playoff games, all with New England, he’s averaged 4.1 receptions, 46.4 yards and has scored 6 touchdowns.

In just this post season he’s got 2 touchdowns and is averaging 9 receptions and 98 yards per game. Without Julian Edelman and Rob Gronkowski, it was Amendola who helped Brady pull yesterday’s game out of the fire.

ESPN.com – After totaling three tackles and a quarterback hit against the Jaguars, Harrison has 11 tackles in three games with the Patriots. He has shown a knack for pressing opposing quarterbacks late in games, in obvious passing situations.

The same exact thought went through my head when I saw that hug. It would seem all but certain that this triumvirate’s final act is coming up. Against the Eagles. To make it 3-out-of-4  for the Patriots.

When it’s all said and done and they’re making the Brady/Belichick 30 for 30, I’d be interested to see Belichick compare this triumvirate to the Patriots First Triumvirate of himself, Charlie Weis and Romeo Crennel. Weis and Crennel were Belichick’s contemporaries. McDaniels and Patricia have been his students, his prodigies. How does that affect their relationships, the decision making processes? Also, does it explain the 10 year gap in championships? The First Triumvirate was in place 2001-2004. The Second Triumvirate has been in place since 2012.

Did Case Keenum Play His Way Out of Minnesota Last Night?

I certainly think so. It was a nice story and a fun run, but how can you hand him the keys to that franchise? With all the momentum the Vikings had from the game-winning touchdown against New Orleans the week before, Keenum hit Kyle Rudolph for a 25-yard touchdown to go up 7-0 on Philadelphia last night. Minnesota then gets the ball back up 7-0.

Keenum then proceeds to throw a pick-six and the rest of the game went to hell in a hand basket for the Vikings. Keenum would throw another pick and lose a fumble as the Eagles scored 38 unanswered points. His final numbers were 28-of-48 passing for a TD with 2 INTs.

Up until last night that Minnesota defense looked legitimate. Mike Zimmer seems like a solid head coach who doesn’t do stupid things to give games away (see Tomlin, Mike). If I were him, I’d take my chances and go quarterback shopping this offseason. It’s a formula that has worked well for other teams in similar situations before, most recently the Denver Broncos in 2016.

Which Nick Foles Will the Patriots See? 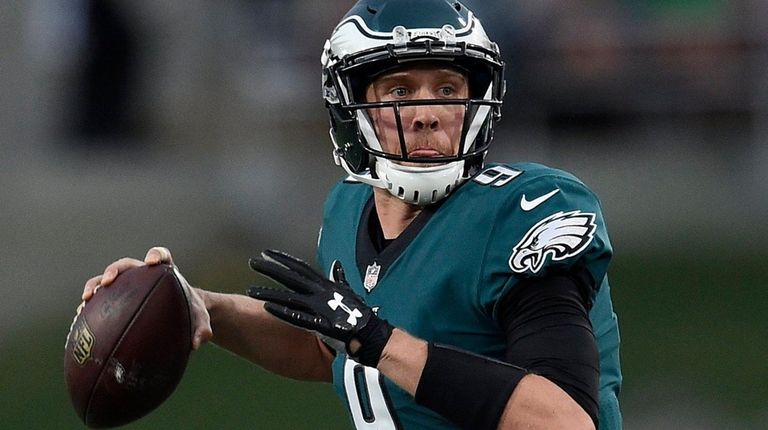 Blake Bortles went 13-of-15 for 155 yards and a touchdown in the first half against the Patriots yesterday, but just 10-of-21 for 138 yards in the second half. Will the Patriots be able to make similar adjustments on Foles? Will they have to?