IGN – Henry Cavill has reportedly quit the role of Superman. Per the Hollywood Reporter, the actor has apparently parted ways with Warner Bros. after three films in the role.

Following Man of Steel, Batman v. Superman: Dawn of Justice and Justice League, Cavill was in talks to cameo in the upcoming Shazam! According to THR, contract talks broke down, and the chances for a further appearance are all but through. Apparently, scheduling conflicts have become an issue for Cavill and the studio, which is supported by the actor’s new role as Geralt in Netflix’s The Witcher.

I’d like to say I took this news better than I actually did, but I looked more like this while reading the news that Henry Cavill is out as Superman 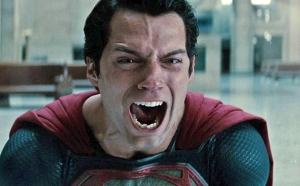 We already saw the demise of the DC Entertainment Universe coming after Justice League came out to very “meh” reactions from fans and that was before Jennifer Garner sent the Batfleck to rehab.

Thanks a lot, Elektra.

It was already a pretty well known secret that Ben Affleck’s time as Batman was nearing its end, especially after his Batman standalone project got canned. Now, as the article mentions, Affleck will likely play a small role in Suicide Squad 2 before hanging up his batarang.

(Despite the jumbled plot, the weak villain, and the terrible ending, Suicide Squad was actually very entertaining, which is why Margot Robbie and Will Smith are billionaire movie stars.)

Now it comes out that Henry Cavill is likely out as Superman and it’s a goddamn shame because Cavill was the best Superman since Christopher Reeve. (Sorry Dean Cain) With Tom Welling as an honorable mention, mostly because he played more Clark Kent than Superman and also because Smallville will forever be branded as the show that sex slavery cult leader Allison Mack was on in the 2000s.

But seriously Cavill was great, albeit the movies were not. Man of Steel was pretty good, maybe a little slow as yet another origin story, but an entertaining entry that kicked off the DCEU and even prominently featured Detective Stabler.

Batman vs Superman looked super promising as it had an excellent teaser trailer, but when the movie finally came out it was a nearly 3 hour confused mess. Not to mention Jesse Eisenberg as Lex Luther is one of the worst casting decisions in recent memory.

Let us not forget though, arguably the best 60 seconds in the entire DCEU history; Bruce Wayne shit talking Superman right to his face.

Then came Justice League, which as mentioned above, was very meh. Not terrible, not great. Lets put it this way; I skipped seeing it in theaters and ultimately ended up watching it on a 5 inch screen on a plane.

I was looking forward to seeing what Cavill and DC could do to salvage this property though. They were never going to compete with Marvel; that ship sailed a long time ago. But they could have carved out a very interesting niche with some of the most popular comic book stories of all time. Some of which Cavill himself mentioned, such as “Superman: Red Son” where in an alternate reality Superman grew up in the Soviet Union instead of the good old USA and how that affects world history as we now know it. I would see the shit out of that.

Or a buddy cop film with the Green Lanterns? Stop trying to build exactly what Marvel has built in giant ensemble films because what Marvel had going for it was a decade plus of great movies leading up to the Avengers. DC had Ryan Reynolds’ Green Lantern..

I have yet to see the new Mission Impossible, but Cavill looked like a goddamn snack in the trailers so I’ll have to check that out.

You won’t be without Cavill too long though as he recently signed on to play Geralt in the Netflix adaptation of The Witcher. I am stoked for that. I only got into the Witcher when the 3rd game dropped, but that is something that is dripping with potential for Cavill.

Playing Geralt of Rivia will allow Cavill to continue being the action star that he clearly is, but The Witcher is a lot sexier than Superman ever was. He’s basically a dangerous, cocky, wandering demon slayer that always has some time for the ladies in his life.

Poor Khal Drogo though, huh? Aquaman hasn’t even come out yet and Cavill has already put an expiration date on Momoa’s superhero career unless his upcoming solo film turns out to be even bigger than Vinny Chase’s premiere.