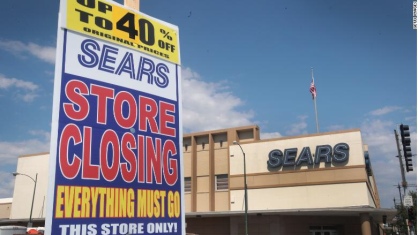 USA Today – For years, there have been reports of Sears death spiraling toward the corporate graveyard alongside other popular brick-and-mortar retailers. The company, once one of the great brands of America, has managed to stay afloat in recent years by borrowing cash from its CEO and selling off desirable assets such as real-estate and brands. Now, reports say Sears is working with advisers to prepare to possibly file for bankruptcy, as soon as this week.

I’ve never rooted against a business as hard as I root against Sears. You can add K-Mart to that list as well since they’re owned by them. In 2018, Sears has no business being allowed to function as an actual store. Every time I go into Sears it is a god damn disaster. There’s never more than two people working the place in the same shift. You got one guy floating around the sales floor folding jeans leaving the registers completely baron while the other guy is out back having a smoke. And K-Mart? Oh boy, do not even get me started. That place is an indoor flea market.

Now I understand, jobs are being lost here and I do feel bad for those just trying to make a living. This anger is directed towards upper management. The same breed of greedy SOBs that put our favorite toy peddling giraffe out on the streets. Get with the times or get left behind. I do hope a company like Macy’s steps up to the plate and hires all 15 of Sears employees as an act of good faith though. It’s funny, because an unnamed 300s blogger actually used to work at Sears back in the day, so we can just pretend it was his fault the company is in shambles now.

RIP Sears. It was fun while it lasted.