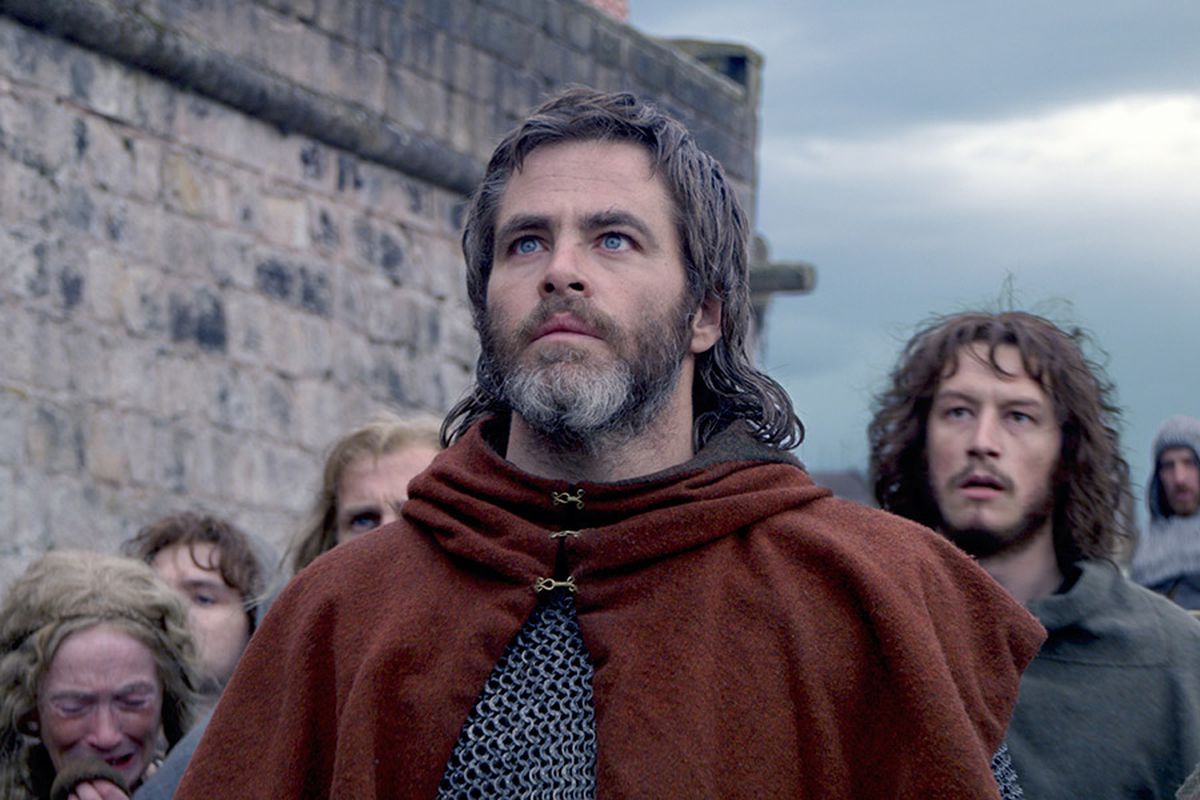 Unless you are the type to follow when certain movies are being made and released, which takes some effort or very specific twitter follows, you may not have known this one was coming until it dropped on Netflix a couple weeks ago. If this is the first time you are hearing of it, I still don’t blame you as although it has picked up steam and begun to make some headlines, it still has a ways to go before being declared the newest “Netflix craze” or “smash”.

“Outlaw King” tells the tale of Robert the Bruce, a 14th century rebel and “king” of Scotland who breaks peace with King Edward of England (again-ish) after the murder of William Wallace in order to gain Scottish independence. He is assisted by a ragtag group of loyal Scots physically and his young wife emotionally all the while conflicted about his purpose, goals, and, to an extent,  the ties that remain with the people he is fighting.

The movie itself is a good, I’d say important, movie to review for a few reasons:

1.) The subject matter. Not only is it the legendary story of a great rebel warrior, but it picks up where a little movie called “Braveheart” left off. Nbd.
2.) Chris Pine. He is the star of this movie. I’ll to get to why this is important in a ton of detail in a bit.
3.) It had a $120,000,000.00 budget and is one of the first of the “big movie” releases that will come straight to Netflix.

Reviewing movies is a tricky art form and I am not even an artist so Ima put on the training wheels and take this step by step.

Chris Pine, as I mentioned before, makes for a most interesting centerpiece in this one. This is because he is A.) not Scottish, B.) Not a brutish ‘warrior” type and C.) I would argue maybe not quite…a true….leading man? I know, I know, he has starred in movies like “Star Trek” and a couple others. He is no doubt A-list and a big name. But he isn’t Tom Hardy/Matt Damon/Leo. I wouldn’t say he is Oscar Isaac at this point in terms of the cerebral way a guy like that can draw you in. He might of even been surpassed at this point by Joel Edgerton. So how did he fair? Quite well actually. How did he pull off a not-quite Chris Pine-ish role? Easy, by playing it in a more Chris Pine-ish way.

To get this over with, I’m not going to bother grading the accent because how the hell can I. He didn’t over-do it and sound like an extra in “Sweet Sixteen” so I’m sure he did passable if nothing else. On to the performance, Pine, as mentioned, cannot be mistaken for a physically imposing, emotionally overwhelming warrior in the same way, for example Russell Crowe is and was when he portrayed Maximus in “Gladiator”. Pine is a tactician, and he applied that approach wonderfully here. His best weapons are a measured pace in his dialogue, the strength of his fucking powerful stare, and, when Robert the Bruce does have to fight, the kind of fast-twitch, counter-heavy approach you’d expect a not-the-biggest kind of guy to use. It all works excellently and I am sure the director (David MacKenzie, “Hell or High Water”, also starring Pine) had something to do with it as well so h/t there. The best Pine parts though were the negative spaces, just after or right before he had to speak or act when he can just use body language and expressions to convey how heavy the current situation is weighing on him.

Honestly, Chris Pine would not have been my first choice for this one. Not to get too side-tracked, but on a last note, Netflix has developed this odd habit of using non-UK native actors for UK parts (Michael C. Hall in “Safe” is another) when there is a WEALTH of talent over there. But he acquitted himself quite well, job well done.

The rest of the characters and cast has quite the curve. The most notable is James Douglas, one of the Bruce’s right-hand men who is out to avenge his family’s name that was disgraced and outlawed by King Edward. Douglas heartbreak and rage is bubbling at the surface the entire movie and when it is time to fight he lets it fly. He is played by Aaron Taylor-Johnson, one of those guys whose name I read passingly all the time but honestly couldn’t tell you what the fuck else he is in. Wikipedia, however, informs me he started dating his wife when he was 18 and she was 41 (nope, didn’t flip that around) and that upon marriage they hyphenated both their names. Sure, why not. AT-J did fucking fantastic in this one.

The other notable performance/character comes from Florence Pugh, who plays Robert’s wife Elizabeth and is probably about to blow up due to the combo of this and her part in the anticipated “Little Women” also starring Emma “Mrs. Joey B” Watson. The part itself is actually kind of skimpily written, but Pugh takes every scene, word, and event and captivates you with not just her, but Elizabeth’s presence and importance.

After that the wheels kind of come off. King Edward is played by Stephen “Stannis Baratheon” Dillane who does what he can but is given a weird ass part. You can’t tell half the time if Edward hates or admires Robert, which although sometimes is a cool internal struggle to watch, here seems legit like the writers honestly couldn’t figure out which. Basically Dillane makes something out of a confusing nothing. O and have I not mentioned his son? With the elder King residing in London, the English are led into battle by his son, Edward the Prince of Wales. This character, by no fault of the actor, is a complete and total rip-off of Commodus in “Gladiator” (woops on using the same movie reference twice in one blog but this is the stone cold truth). He is an unstable, insecure offspring of a neglectful King/father who wants so desperately to win his father’s approval that he goes to abhorrent lengths to do so. The only small difference are a couple of moments of small mercies granted by the Prince, but it just isn’t enough to not see the glaring similarity.

The plot and movie itself is truly hard to put a finger on. I guess “unsteady” is the word real critics would use. Like I said, you don’t know what the King is thinking half the time, Robert himself seems half-commited to, O I don’t know, a full-scale national rebellion, on more than one occasion, and there are so many generic Scottish characters it gets a bit confusing to tell who is on what side.

While I like that they kept the number of battles on the lower side, the sequences themselves are kind of “meh”. This would be understandable as for the most part they don’t seem to be going for a gorefest, but there are a few notable exceptions to this. Maybe, one could theorize, they wanted people to focus as much as possible on Robert/Pine and his inner circle’s personal struggle and not as much on the skirmishes as a whole.

To be a little “more glass is half full”, given the acting and way Robert the Bruce and men are framed, you can’t help but really connect with them and their struggle. Elizabeth is also captivating as a beacon of loyalty and resolve.

Overall, “Outlaw King” is good, not excellent, rainy day or night-in fare for anyone that likes a solid lead and history, particularly of  the medieval variety. If you are looking for your Thrones fix and can’t wait until April, this will hold you over for a couple hours. But if you are looking for the next “Braveheart” or any kind of epic “underdog movie”, you will most likely be let down.

Overall Grade: “B-” . Not quite a solid “B” but definitely not dropping to the “C’s” either. Good stuff.