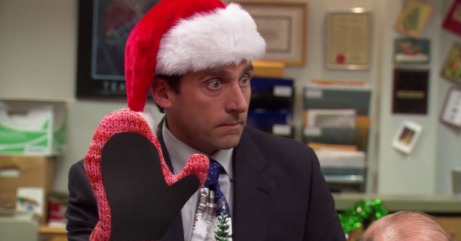 So I sat down on Christmas Eve yesterday and got sucked into about four hours of sitcom marathons. Few things are better at this time of year than binge watching all the random sitcom Christmas specials. It’s become a staple for any sitcom worth its weight. So lets break down some of the best Christmas specials from over the years.

After photoshopping himself onto an old photo of Carol’s family over the ex husband’s head, Carol is creeped out and dumps Michael. Meanwhile the office is split in two as the party planning committee argues so Pam and Angela end up creating two separate office Christmas parties.

The Simpsons love doing holiday specials and this Christmas episode is one of the funniest specials of all-time. Bart drinks a dozen glasses of water so he can wake up early on Christmas before everyone else. He does just that, heads down stairs to play with some new toys except he accidentally burns the Christmas tree down and all the presents underneath it. Naturally he lies about it and the entire town of Springfield takes sympathy on the Simpsons until Bart cracks. Hilarity ensues.

While technically not a “Christmas” episode, this is still one of the best Christmas specials as George’s father invents a new holiday all together: Festivus. Airing of Grievances, Feats of Strength, the Festivus Pole, which is displayed unadorned because tinsel is distracting. People literally buy aluminum poles and put them in their living room as an ironic protest of Christmas and I will laugh every time I see it.

Malcolm in the Middle

One of the more underrated sitcoms that never seems to get the credit it deserves. All the more relatable to people because of the absolutely chaotic family dynamics.

If Billy Bob Thornton is the No. 1 disaster of a Santa Claus then Red Forman is without a doubt 1A. The older I get the more I personally identify with Eric’s curmudgeon of an old man. When a girl asks for a pony, Red tells her ponies die. He also tells another boy who asks for a slinky that he’ll be getting flash cards for a present: “Math. That’s what you’re getting for Christmas.”

What’s your favorite Christmas special? Tweet it at me @The300sBoston and we’ll get the ball rolling on this nostalgia trip.

Tagged as: Festivus, Malcolm in the Middle, Seinfeld, Sitcom Christmas Special, Sitcoms, That 70s Show, The Office, The Simpsons, TV