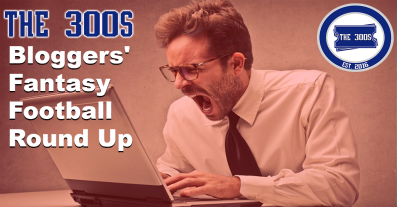 Welcome, welcome to our awards. Before we begin I’m going to briefly kick it to our team on tonight’s red carpet…

Thank Joey! Here we see Founder Red wearing a Lakers jersey with camo cargo shorts. I’m really digging his ironic choice that is clearly a protest to our recent cooperation with North Korea. Back to the studio…

Thanks guys! Now before we proceed I should probably explain what these awards actually are about since nobody fucking knows.

We have all picked a bust or 12 throughout our fantasy football seasons, however most are of either the “reach” or “hard on” variety. A “reach”, as is well known, is a player you pick a bit too high, possibly motivated by the fear of someone else picking him. A “hard on” pick, for lack of a more enlightened term, would refer to players that we just personally really like without a ton evidence as to why and that simply don’t work out.

These awards, however, celebrate the “cock teases” – players who are picked at a good time given their value, normally put up good numbers relative to that selection point, yet completely fuck us. They don’t buy us dinner first either, just bend us over the analogous  10, 12, or 16 team table and fuck us.

So without further ado, as composed by and contributed to by our talented staff, I give you The 300s 2018 All Cock Tease Team: 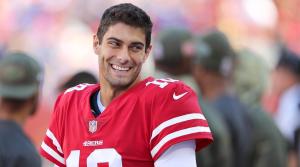 QB: Jimmy Garoppolo, San Francisco 49ers
Red: I was ready for Jimmy G to rise like a phoenix out of the ashes that was my 2017 fantasy season, but in his third game the most handsome ACL in the league exploded and I was stuck with Matt Stafford at QB the rest of the way.

RB1: Jordan Howard, Chicago Bears
Mattes: Now, a lot of people might give me crap for drafting Howard in the second round of a PPR draft. First, I’d like to respond by saying it’s only a half-point league, and, second, the guy also had two-straight 1,200-plus-yard seasons and nine touchdowns last year on a bad team. I – like many – expected the Bears to be much-improved this year (which they certainly are), and I also believed new head coach Matt Nagy when he said he’d finally get Howard more involved in the passing game. Then came along Tarik Cohen, and there were also five games this year in which Howard averaged under 2.6 yards a carry. In fact, Cohen actually ended up finishing over FOURTY spots ahead of Howard in the overall rankings this year. Picked the wrong guy, I guess, huh?

RB2: Le’veon Bell, Pittsburgh Steelers
GUEST CONTRIBUTION! Patty Blackouts: I mean what is there to say besides he’s a seflish fuck who passed up 850k a week to sit out and try and protect his body to try and get a long term deal. Took him 4th overall thinking he’d show up sometime around end of September or October and nope just sat out all season sending cryptic tweets so you’d think he was going to report and next ya know he’s playing pickup basketball games at the local Y. I hope no one pays him what he wants and he regrets passing up the 14.5 mill he would have been paid this season by signing the franchise tag. But yes I’m bitter because  I used my first overall pick on him in fantasy got the same amount of points out of him as he did paychecks this season….0!

I hope he gets hurt in the next preseason. 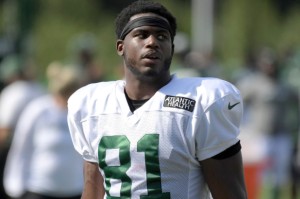 WR1: Quincy Enunwa, Goddam Jets
Red: No one, and I mean no one in my fantasy league watches more Jets games than me as the Mrs. is a huge fan. So watching a team that bad I was determined to derive some value out of it, which is exactly what Quincy Enunwa was going to do for me. Enunwa was going to be the steal of the draft as he put up 15, 12 and 10 points in 3 of the first 4 games, but then his season was derailed by various injuries. He cracked 6 points just once after September… 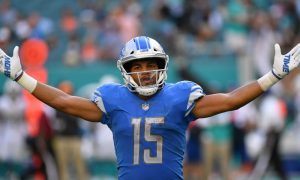 WR2: Golden Tate, Detroit Lions/Philadelphia Eagles
Joey B: Tate started the season as Matthew Stafford’s #1 option in what is normally a high flying Detroit offense. To that end, he kicked off the season with games of  17, 15, 10 and TWENTY FUCKING NINE. After that he completely shit the bed, probably became an asshole in the locker room because he realized his name is fucking Golden, and then got traded to Philly where he had one game of 20, coincidentally the only other time he’s seen the end zone since September, and seemingly is hated by all 12 of Philly’s playoff-ready QBs. 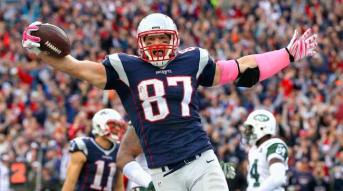 TE: Gronk
Joey B: I always pick Gronk wayyyy too high because he plays a position where all of 4-5 guys give you tremendous amounts of points and even among those guys he usually stands out. But this year, as the world knows, was different. He’s just broken and I’m just sad. 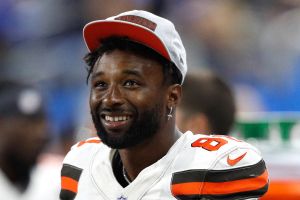 Flex1: Jarvis Landry, Cleveland Browns
Mattes: Landry wasn’t without a few big games of his own this year. Also like Cousins, Landry was a guy whom I expected to make a huge splash with a new team this season, but instead was super inconsistent. Yes, he had to deal with learning how to play with two different QBs this year, but remember that Baker Mayfield has been playing since Week 3. In the 13 games he’s played with Mayfield, Landry has put up single-digit totals in seven of them. For a guy who averaged 99 catches per season before this year, his mark of 72 through 16 games this year is incredibly disappointing. 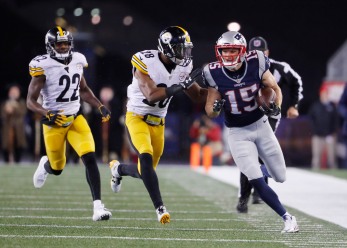 Flex2: Chris Hogan, New England Patriots
Big Z: With Brandin Cooks in LA and Julian Edelman sidelined for the first four games of the season, I was certain Chris Hogan was a steal in the fifth round. He would be one of Tom Brady’s top targets the first month of the season, and hopefully stay in the mix even after Edelman returned.

Hogan scored two touchdowns in Week 2, but he wouldn’t find the end zone again for three months. By that time I had already dropped him and moved on. Just another cautionary tale of putting too much stock in to a Patriots WR/RB for fantasy football purposes.

D/ST:  Los Angeles Chargers
Joey B: With Joey Bosa and company up front and some decent pieces in the secondary, I thought the “pressure creates turnovers” rule would get me some points on D. Instead Bosa got hurt and the Chargers are last in return yards allowed. 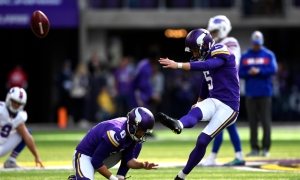 Kicker: Dan Bailey, Minnesota Vikings
Big Z: Drafting and picking up kickers in fantasy football is a bit of a crap shoot. You just try to pick up a guy who kicks for a team with a good, but not great, offense. If he plays in warm weather or a dome, even better. That’s why I love NFC South kickers and why I will never draft the Bills kicker.

Dan Bailey had a rough 2017 and got released by Dallas. But he was at one time the most accurate kicker in NFL history. When he got picked up by Minnesota, I thought he would be a good guy to take a flier on. Accurate kicker on a good, not great, team that plays its home games in a dome.

Bailey is 20/27 on field goals for the Vikes this year and his 2018 may be worse than his 2017. Yikes. God help the Vikings special teams coach

*BONUS: Mid-Season Pick Up Fist Fucker of the Year*

Red: MVS was one of the few guys I was first to the punch on in my league and he looked like a STUD. 6’4″ with 4.3 speed and Aaron Rodgers throwing him the ball? Yes please. After a quiet start to the season MVS blew onto the scene with a 4 week stretch of 13+ points. He would post 6+ points just once the rest of the way…