LeBron Does Know He Lost to the Warriors 3 Out of 4 Times in the NBA Finals Right? Right?? 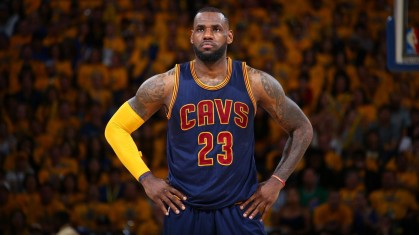 I give LeBron credit for winning the NBA Finals in 2016 because the current era Golden State Warriors are one of the best teams of all time. But with that being said it took a Draymond Green suspension and one of the most cold blooded dagger threes of all-time from Kyrie Irving to get him there. He also lost to that same Warriors team in 2015, 2017, and 2018. So maybe releasing footage of yourself harping on how the Warriors fuck up all the time is not the best look. Self awareness has never been LeBron’s strong suit though.

On ESPN+, “More Than An Athlete” takes you inside the Cavs locker room after the crucial game. https://t.co/8vE9wIaUfr pic.twitter.com/KLgQQ2Mnjy

This all comes just a couple of days after footage came out of LeBron crowning himself the greatest of all-time for winning the ’16 finals. Despite losing to that same team 3 out of 4 times.

LeBron explains why he thinks he is the “greatest player of all-time.”

I don’t want to always harp on LeBron, I really don’t, but he just sets himself up for it. Listen, LeBron has done a lot of great things:

He brought the city of Cleveland its first title in 50 years.

He was excellent in Trainwreck.

And he is one of the best players of all time, but despite an impressive 8 straight appearances in the championship round he is still 3-6 in the NBA Finals. So maybe, just maybe, one pretty impressive comeback against a really good team doesn’t propel you to GOAT status. If that were the case then Ray Allen could say the same thing for his Game 6 dagger 3 against the Spurs.

Come to think of it, if it weren’t for ice cold blood in the veins of Jesus Shuttlesworth and Kyrie, LeBron James would be 1-8 in the NBA Finals.