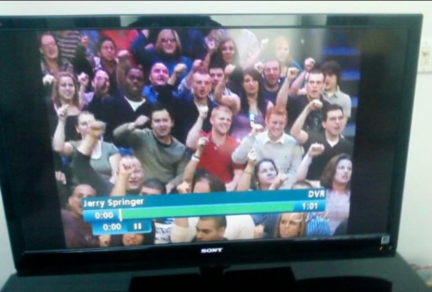 Facebook Memories are a glorious thing sometimes. Eight years ago today I legitimately skipped a final exam in college to go sit in the front row at The Jerry Springer Show.

That is not a punch line. It was either final exam* or an opportunity to see the legend that is Jerry.

The Jerry Springer Show is filmed in Stamford, CT which is less than an hour from where Mattes, Papa Giorgio and I all went to college. So when a friend, without any sort of heads up, came out of the woodworks and said he had tickets to Jerry that day? There was no choice to be made. We were going.

The audience of Jerry Springer is a rare breed of humans that come together to watch  people just beat the hell out of each other before you even have lunch. I actually got to ask one of the questions that aired at the end of the show too, which still haunts me to this day that we don’t have recorded somewhere.

*Luckily, my professor found it hilarious and actually let me take the final at a later date because college is fake life.