NBC Sports – The relationship between the New Jersey Devils and David Puddy goes back 24 years when Seinfeld aired the legendary “The Face Painter” episode, with Puddy supporting the team through the red, white and green art on his face.

On Feb. 19, you can take the face-painted Puddy home in bobblehead form when the Devils take on the Pittsburgh Penguins during the team’s ‘90s Night.

Gotta let them know you’re out there, it’s the playoffs. New Jersey and New York have the absolute best Seinfeld related giveaways, especially the Brooklyn Cyclones with their incredible swag each summer. (I’ll let Papa Giorgio tell his story of how he missed out on the legendary Keith Hernandez clock another time)

I am a diehard Seinfeld fan so this bobblehead speaks to me. Hell I once went all the way down to City Hall on my lunch break to meet the one and only Soup Nazi.

I’m not even a Devils fan, but I might have to expense an Amtrak down there on my debit card to pick this up.

Bravo, New Jersey. Bravo.You might have an absurdly complicated turnpike system as means of getting around your state, but goddamnit did you hit this out of the park.

PS – Some of the best Seinfeld theme nights and giveaways below: 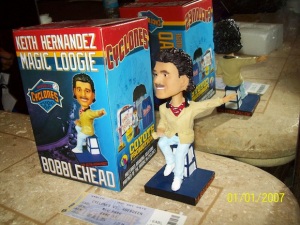 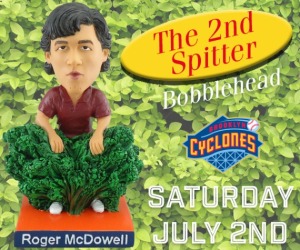 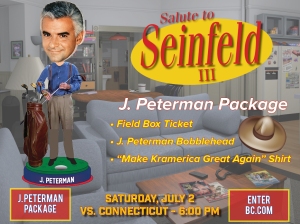