OK. I’ll admit the headline is pure yellow journalism, at its finest, but I’m not exaggerating at all when I say the Sox’s young lefthander has been getting a lot of attention in spring training so far. Like A LOT.

Last week, the team held its first official workout, and it’s still incredibly early to start making any real predictions for the upcoming season. But that hasn’t stopped coaches, teammates, and writers alike from gushing about the 25-year-old, who is apparently in “the best shape of his life”:

After a breakout rookie campaign four years ago – during which he posted a 3.85 ERA with 10 wins across 121.2 innings – Rodriguez posted a combined 4.42 ERA over the next two seasons, leading some to believe his first go-round was a fluke. Yet the southpaw battled back to post a 3.82 ERA as a back-end starter in 2018, and he also saw his K/9 increase for a fourth season in a row, settling in at a more than respectable 10.1 by season’s end. He did miss all of August and most of July with an ankle issue, but overall it was a solid year.

E-Rod had a rough postseason run, though, finishing with an 8.10 ERA across 10 frames. Sadly, the lasting image of him from last season was the mini-hissy fit he threw on the mound in Game 4 of the World Series after giving up a meatball home run to Yasiel Puig, which put the Dodgers up 4-0 in the game. The Sox eventually ended up winning the game – AND the series! – and I still think that he might’ve taken too much heat for the reaction. But it only furthered the notion that perhaps the young fella didn’t have everything he needed between the ears to take the next step in his development. That wasn’t a great moment for the kid, but he’s already over it, and we all should be too.

That is, until this spring.

Seriously, just Google the name “Eduardo Rodriguez,” and you’ll be treated to a PLETHORA of articles about how great he’s looked so far. Not only does he look more trim, but reports are that he also wowed his fellow teammates during his first live batting practice session on Tuesday.

Apparently, the key to his success has been adding a much more refined slider to his repertoire. He’s always possessed a pretty lethal fastball/changeup combo, but his inability to master a third pitch has held him back. Now, after working with staff ace Chris Sale, he’s ready to unveil a whole new arsenal to the world in 2019:

“I worked with Sale and most of the guys, asked everyone the way they throw the curveball and slider and how they finish,” Rodriguez said. “But mostly Sale, because he has the best (expletive) slider in the game, so that’s how we do it.” (h/t Boston Herald)

Obviously, anyone outside of Fort Meyers has yet to see the new pitch, but the kid seems pretty freakin’ fired up about. 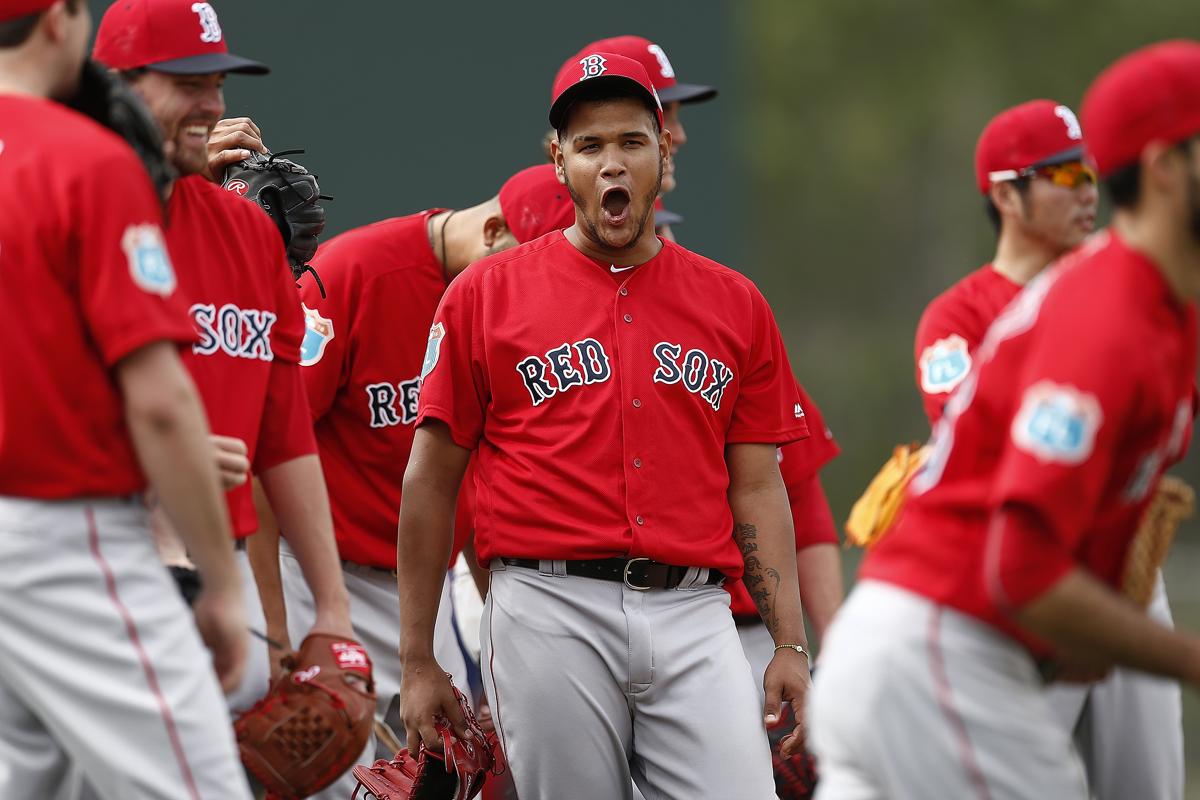 Sale himself added to the praise by saying that E-Rod has displayed some noticeable “drive” this offseason, and Nathan Eovaldi added, “I feel like he’s taken it to a whole new level.”

So, after what had to be the most boring offseason in Major League Baseball (or even major professional sports) history, we finally have a little something to get excited about for the upcoming season. Especially for a rotation that does not come without its questions and concerns, the early news out of camp about Rodriguez is extremely encouraging. Fingers crossed!

The Sox are set to kick off the preseason campaign on Friday against Northeastern before a showdown with the Yankees on Saturday afternoon.