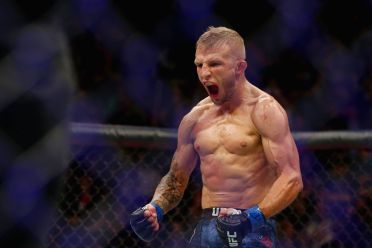 Thus ends T.J Dillashaw’s run of Michael Scott-ing this story. He is no longer in front of it. As a matter of fact, as much as I respect Dillashaw for relinquishing his title ahead of time, this story is still steamrolling him.

It would seem he tested positive for one of the most, for lack of a better word, sinister kinds of PEDs. To paraphrase Jeff Novitsky himself, EPO isn’t something you find in a tainted supplement or something. It’s a red blood cell picker upper you inject into yourself, and sort of have to be aware you’re doing it. That’s that. Novitsky may have recently compromised himself by putting over Jon Jones’ “cleanliness”, but he still knows his stuff.

To my knowledge Dillashaw has not come out and made a statement since this suspension was announced (he got a year, concurrent, from New York). However it has been already stated he won’t fight it, which is a statement in and of itself. It’s fair enough, I suppose to speculate on his career now, both past, present, and of course, future.

After he big brother’d Renan Barao, the longtime Bantamweight king, in two consecutive fights with an immaculate and to be honest surprising displaying of world class kickboxing, I honestly thought Dillashaw had a shot at becoming one of the GOATs. That sounds ridiculous but I’m not kidding. His display of MMA was truly an “art” form, pun intended. Now he’s been knocked out by Cejudo and may have been one of the MOST performance enhancing substances when he beat Cody Garbrandt as well. Soooo what then? How do we look at his accomplishments? Furthermore, let’s say he pisses clean for the next two years and then comes back. He’ll be 35 then. The years aren’t as kind to the smaller guys as they are to the bigger ones. Sure there are fighters like Assuncao that solider on, but you can bet even he wishes he was getting the chances he is now when he was younger. Dillashaw’s own ex-teammate Chad Mendes came back two years after testing positive, a very similar situation, fought once and retired quietly. Given Mendes was on a bit of a slide already, but you can’t help but see the comparison.

So we’ll see what happens next. Maybe T.J Dillashaw stays quiet for a couple of years and tries to make a come back. Maybe he asks for his release and goes and fights abroad. Maybe he and Duane Bang open a head shop. Not too sure. Stay tuned.