Game. Seven. This Bruins Maple Leafs Series Has Taken Years Off My Life and It All Comes Down to Tonight 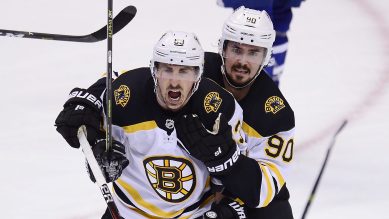 Game 7. It all comes down to tonight and my anxiety is peaking because this game is going to be a battle. Before the series started I had Bruins in 7 so I’m sticking to my guns, but it is problematic that the B’s have only played well in even numbered games. Seriously, they looked excellent in Games 2, 4, and 6 and then looked like an old, slow, shell of themselves in Games 1, 3, and 5. So with 7 being an odd number I am a little worried, but all superstitions aside with the Bruins having home ice for the winner take all game I feel like they’ll pull this one out. That or I’ll take a long, angry walk in the rain later tonight.

Lets take a look at some of the keys to the series and in particular tonight’s game. 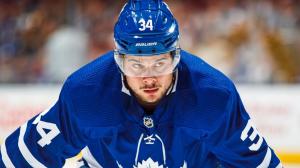 Look we all know how good Auston Matthews is with the puck as he’s had 37, 34, and 40 goals in each of the last three seasons. With that being said though, he hasn’t always been a stud in the playoffs, especially last season when he had 1 goal and 1 assist in 7 games against the Bruins before getting bounced. It looked like it was going to be more of the same this series, but the kid has gone from getting dumped on for his ghost presence in Games 1-2 to scoring 5 goals in the last four games. This kid terrifies me.

Is Tuukka Rask Going to Show Up? 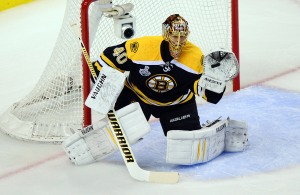 Is he stealing games? Should he be DFA’d right now with Halak getting the Game 7 start? Read and listen to sports talk at your own risk because as a rational person you know the answer is somewhere in the middle, but the middle doesn’t drive clicks like a massive overreaction does. He’s been pretty up and down, but I think for the most part he’s giving the Bruins a shot to win each night. He’s 3-3 with a .921 save percentage in the playoffs, which is good for 6th in the NHL Playoffs, one slot behind….you guessed it…Frederick Andersen. He’s also 6th in Goals Against Avg at 2.54 per game. Is that a ringing endorsement of a former Vezina winner? Not exactly, but if he can keep the B’s in the game then thats all they need.

Discussions From the Cheap Seats

If NBC Sports gives us the cheap seats camera angle again I will blow a gasket.

These three need to be THE guys like they were all year long. Frequently referred to as the best line in hockey, Bruce Cassidy has opted to spread the wealth and move Pasta down to the second line. Thats all fine and well, but these guys have not exactly looked like themselves for much of the series.

Marchand has heated up and now has 4 goals and 5 assists in the series, but for too many stretches of time these three have been taken out of the game. I don’t know whats going on with Pasta specifically because in Game 2 he was laying the wood on guys and in Game 4 he scored 2 goals, but other times I forget he’s even on the ice. Those are his only two goals in the entire series actually, and one of them came on a mental breakdown from Toronto.

…needs to get his shit together. The guy is a beast on the powerplay and finished the year Top 5 in points for the B’s so they clearly need him, but he’s been a liability on defense at times this series. On two plays late in Game 6 Krug badly misplayed dumped pucks and pucks off the side board before getting easily beat to the play only to barely get bailed out by his teammates. I don’t need Krug to be a 2011-level shutdown defender like Zdeno Chara, but just keep the puck in front of you please.

Krejci seems like an old man because he’s been on the Bruins for 13 seasons, but he’s really only 32. The main difference with him is that he’s finally healthy and he’s looking like his old self, especially when paired with young guys like DeBrusk (which we’ll get to in a moment). Krejci is fourth on the Bruins in playoff points, but he is dishing the puck like vintage Krejci lately.

Jake DeBrusk finishes the give-and-go with David Krejci to double the #NHLBruins lead over the #LeafsForever. It’s a 3-1 game. pic.twitter.com/NKyXjVeCUz

If you remember, any time the Bruins make a run for the Cup it’s been in large part due to David Krejci. In 2010-11 he had 23 points in 25 games and the B’s won the Stanley Cup. In 2012-13 when they lost to Chicago he had 26 points in 22 games. So if Krejci is looking like his old self then the Bruins suddenly have a huge boost to their depth and secondary scoring.

Jake DeBrusk Has Evolved Before Our Eyes

This kid has been lights out for most of the series. He’s been a physical presence and before his suspension was drawing the ire of infamous dirtbag Nazem Kadri.

Kadri is going to get legitimately murdered by the end of this series. #NHL #Bruins #NHLBruins #MapleLeafs pic.twitter.com/sHnABCFcQI

He’s only got 2 points in the series, but seems to always be buzzing around the puck as his ice time is up a full minute from last year’s playoffs to 15:54 per night.

If you’re feeling frisky and want to bet some hard earned Schrute Bucks on Game 7, as if these games weren’t stress inducing enough, well here are the odds for tonight’s matchup.

Heading into Game 7 with the Leafs, the Bruins’ Stanley Cup odds assessed from sportsbooks here are as long as +1000 (10/1). The Bruins would have to have a roughly 55% chance, on average, to win each of their remaining series, including Game 7 vs Toronto. That’s pretty high for something as unpredictable as the NHL playoffs (just ask Tampa Bay), but Boston would have home-ice against 10 of the 11 teams remaining. With their 29-9-3 home-ice record, theres a pretty strong argument that +1000 is a good price at this point.

Godspeed to everyone heading to the Garden tonight and for everyone watching at home just make sure you have all your adult beverages in plastic cups to avoid any destroyed property.