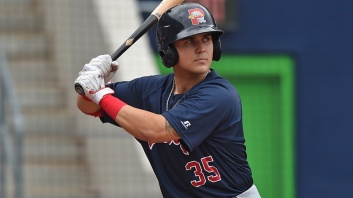 Listen I’m not one for hyperbole, but I’m pretty sure after watching Red Sox rookie Michael Chavis for 9 games, he’s headed to the Hall of Fame. The dude has come in and immediately started to rake. While its common for rookies to sometimes get off to a fast start before the league puts together the book on you and starts pitching to your weaknesses; its less common for a rookie to immediately look like he *belongs*

#RedSox win!
Michael Chavis: (2-for-4, 3 RBI) drove in a career-high 3 runs on a pair of singles…Has 8 RBI in 9 career games.
· Gave the Red Sox a lead with a 2-run single with 2 outs in the 3rd inning…Was his 2nd go-ahead RBI and first game-winner. pic.twitter.com/ccOudQOrOd

Since getting called up Chavis has pretty much been an every day starter, especially after CROAKING a double in his first career at bat, in a clutch situation to boot. As a pinch hitter off the bench no less.

Michael Chavis can NOT be stopped.

That’s one way to announce your arrival. #RedSox No. 1 prospect Michael Chavis launched a ball out of Fenway Park for his first #MLB home run. The 🚀 traveled 441 feet with an exit velocity of 110.2 mph.

In the interest of full disclosure I was not super optimistic about what Chavis was going to look like after returning from a PED suspension, but as I blogged about when the Sox called him up he’s actually been *better* at least in terms of OPS..

I don’t wanna jump the gun or anything, but do we have enough room in right field for his retired number?