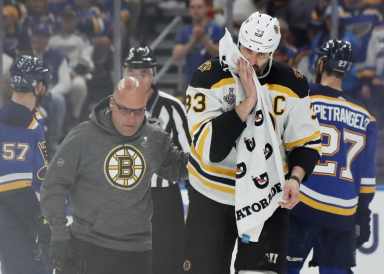 The Bruins missed a huge opportunity to put the Blues on the mat last night so I guess the gentleman’s sweep is off the table. The difference between a 3-1 series and a 2-2 series is night and day so I don’t love going back to Boston tied. Although I’ll take the Bruins playing best of 3 with home ice advantage.

I was definitely a bit rattled last night though when I saw the St. Louis hype video they played right before the game. Every sport does this when they pull a local celebrity out to do a voiceover for their team, but St. Louis has a goddamn hammer in their back pocket.

I love #Boston and I don’t want to besmirch Denis Leary but my goodness its just not fair #StLouis has Jon Hamm on deck for a #StanleyCup voiceover. #NHL #NHLBruins #Blues pic.twitter.com/ZPNjCK916R

An encouraging sight last night was Tuukka in his post game presser with the media because he looked unfazed. As he should, its hard to pin any of those goals on Tuukka really. He was a confident, defiant, snarky asshole and thats exactly what I want to see from my goalie.

Listening to the NBCSports Boston postgame last night they said it was reported that Chara was “advised not to play” but didn’t specify whether that meant if he was cleared or not. Either way it was odd to see the captain sitting on the bench, never getting a single shift in the third period. Granted that puck to the face looked gruesome, I’m not sure why he wouldn’t be given a second of ice time? Concerning to say the least.

I’m really starting to despise this Blues team though. Coming in they were known for hard hitting, but a lot of what we’ve seen over the last 4 games has crossed the line. The Matt Grzelcyk hit, the cross check to David Backes’ face, and not to mention all the flopping. Tarasenko could have won an Oscar for selling that elbowing penalty in the third period, and Binnington looked like the Life Alert lady last night.

Holy shit do the Blues seem to hate David Backes. Did he burn a Missouri flag on his way out of town or something? It seems odd for this Blues team to be taking shots at their former captain every single chance they get and not just clean hard checks either. Can you imagine the Bruins taking liberties on Chara if he were to finish out his career somewhere else?

Charlie Coyle remains King of the South (Shore) with another goal last night, giving him NINE goals in this playoff run. Insane.

Heading back to Boston its great to see Brad Marchand and Patrice Bergeron starting to get hot over the last 2 games. They started off non-existent in the first 2 games of the series, but you’re starting to see more of the playmaking in the last 2 games that made them the most dangerous line in hockey.

The Blues responded in Game 4 as they looked like a team playing with their hair on fire. The Bruins tried to respond and keep pace, but they couldn’t do it for 60 minutes, they lost their captain and anchor defenseman for the third period, and St. Louis caught some lucky rebounds.

All in all a frustrating game to watch, but I still have faith the Bruins pull this one out. Originally I had them in 6, but I could easily see this series going 7 now. See ya at the Garden boys.

PS – Grab your Bear Force One shirts for the stretch run!