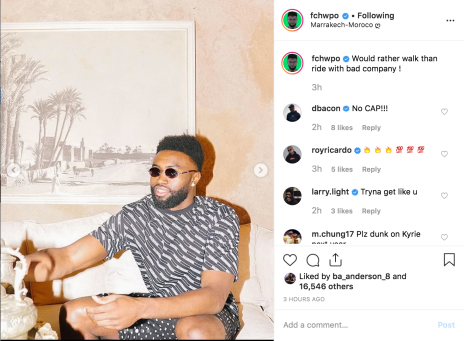 THIS is telling. This is 1,000% about Kyrie Irving and if you don’t agree you are lying to yourself. I love Jaylen Brown, I think he has a lot of untapped potential which we’ve seen in spurts the past 2+ seasons, but he has yet to put it all together. Obviously he’s a very intelligent guy as the youngest elected VP of the NBA Players Association, and entering his fourth year in the league its time for Brown to show why he was a No. 3 overall pick. As for the ice cold IG headline, I think we all know that Jaylen Brown fucking hates Kyrie’s guts. From his midseason interviews clapping back at Kyrie for throwing “the young guys” under the bus:

For context. Jaylen wasn’t even asked about Kyrie comments. He wanted to talk about it.

Q: How do you stop being uptight?

A: “We can’t make comments. We can’t point fingers. We just gotta empower each other. If we don’t everybody’s going to go into their own little shell.”

To his post-game comments after getting knocked out of the playoffs by Milwaukee:

And lets not forget Brad Stevens’ comments after that Milwaukee series too.

“I always reference Jayson and Jaylen, I can’t imagine handling what they have to handle at 20 and 22. I cant fathom it. I would have cracked a long, long time ago.”

So hopefully this is addition by subtraction when Kyrie walks, but I gotta admit I do not feel great about this team when Al Horford signs somewhere else too. That last sentence is something that sports radio has mocked for the past three years because yes Al Horford is not objectively worth $30 Million  a year, but he was still an integral piece of this team’s success.

I already declared that the Celtics now belong to Jayson Tatum, but you’re riding shotgun Jaylen so lets see what you got.