NY Post – Quarterback Mark Sanchez is putting away his helmet and heading to ABC/ESPN to be a college football analyst, The Post has learned.

Sources tell The Post the former Jets quarterback’s main job will be in ABC’s lead college football studio, where he will join Kevin Negandhi and Jon Vilma. Sanchez is replacing Mack Brown, who left to coach North Carolina.

The Catch. The Immaculate Reception. The Butt Fumble. There are certain plays in NFL history where you just say two or three words and everyone knows exactly what you’re talking about and where they were when it happened. Luckily for me I was a part of NFL lore because I actually attended The Butt Fumble game at the Meadowlands. I saw that glorious play on Thanksgiving night 2012 with a bunch of my buddies. Since it was Thanksgiving we had been eating and drinking for about 8 hours leading up to the game so saying I *saw* the play is technically accurate even if it didn’t fully register up in the 300s section.

I do however vividly remember the stadium announcers not even addressing what had just happened and just moving along like it was business as usual. Thank god for high def cameras though so this incredible performance could live on in the football archives forever.

Oh and Lenny Kravitz played the halftime show that game. What a night.

Anyways, shout out to Mark “the Sanchize” Sanchez for a head scratching yet decent career. He led the Jets to BACK TO BACK AFC CHAMPIONSHIP GAME APPEARANCES as we would hear for years and years despite not winning any of them. He was a solid if unspectacular quarterback, but if you remember it was a shock the Jets traded all the way up to No. 5 to draft him. Especially after his coach at USC and current Seahawks coach Pete Carroll was a pretty big asshole when asked about his assessment of Sanchez turning pro.

Looking back he was probably right as Sanchez was the the full time starter at USC for only one season before skipping his senior year to go pro and immediately being crowned the savior in New York and starting as a rookie.

He’ll forever be linked to Rex Ryan as the two spearheaded the most successful era of Jets football since the Bill Parcells days. That was a fun time to be a Patriots or a Jets fan because both teams were very good and the Jets loved to talk so it led to some heated rivalries. Theres still players from those late 2000s Jets teams that I despise like Bart Scott.

Can’t Wait til your radio show gets cancelled.

So Sanchez may have only thrown 20+ touchdowns once in a season and may have thrown three interceptions in a 45-3 blowout to the Patriots on Monday Night Football, but he seemed like a genuinely likable guy. Sure he had some weird photoshoots 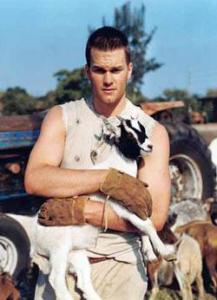 I don’t know if I’ve ever identified with a pro athlete more than the time Sanchez got busted sneaky crushing a hotdog on the bench.

I respect that move.

Well, Sanchez is off to ESPN where I think he will actually be a great football personality. A good looking dude with some charisma and legitimate NFL playing experience? Sanchez and fellow USC alum Matt Leinart will be the deadliest duo on the LA circuit since the days of Leo Dicaprio and Tobey Maguire.