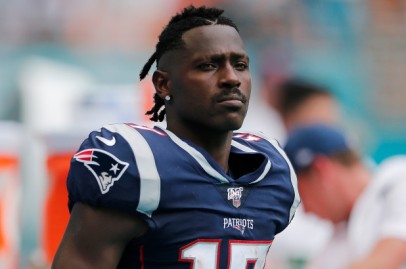 I woke up today, as you all did, to yet another news story of Antonio Brown being an absolute moron and allegedly intimidating an accuser of his.

Has this guy never seen The Town before?

The craziest part is that the Patriots seem to be digging their heels in on the matter. Its one thing to bring in a guy who just seemed to be a mercurial diva wide receiver and then get caught with your pants down regarding the civil case, as they reportedly did. Its another matter to have him allegedly intimidating his own accusers while on the Patriots active roster. Everybody knows the Patriots are better than The Cleaners in John Wick when it comes to cleaning up a mess and putting a player on the straight and narrow.

But most of those players in question were just diva a-hole football players. Antonio Brown seems to be at best a child who’s never been told no and a scumbag at worst. Most of these things are still just allegations so no one is legally required to do anything, but Bill Belichick in particular seems to be losing his touch with the media. For the second time Bill got visibly frustrated and walked out of a press conference when peppered with Antonio Brown questions.

Belichick walks off, not willing to delve more into the Antonio Brown story than he did in his opening remarks #Patriots pic.twitter.com/ZM2eOVi1hT

I didn’t expect Belichick to actually talk about AB’s legal situation, but I never expected him to noticeably get his back up and storm off the podium like he’s done now twice.

Why then is the team willing to put up with all the bullshit?

Former Patriot turned sports talk radio host Ted Johnson as well as MMQB reporter Bert Breer have both theorized that Belichick is putting up with whatever he has to with AB because he knows Brown can help him chase the won thing thats always alluded him; 19-0.

Its only Week 3 so 19-0 is fun to talk about and its easy to turn a blind eye for most Patriots fans, but these stories are piling up at an alarming rate for a team that didn’t have a dire need for Brown. If the Pats are 1-1 its probably a lot easier for Bill to just say fuck it and cut bait, but is he holding onto Brown for an all out attempt at going undefeated? I don’t know, but I do know its getting harder to defend the silence from the team.

I was never going to defend the move *or* AB because he clearly is out to lunch, but how long will the team, and Robert Kraft specifically, take heat on behalf of an employee who hasn’t even been around long enough to play a home game yet?