Kanye Getting Roasted for Meeting with Donald Trump. Huh? 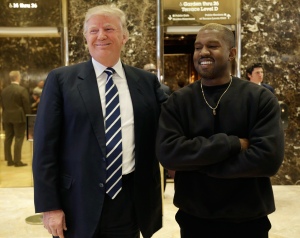 Kanye West is getting absolutely roasted on Twitter for meeting with President-elect Donald Trump today. One of the most famous (and influential) people in the world wanted to have a convo with the next President of the United States and he gets shit on for it. Kanye is a wildly successful musician, extremely eccentric personality and probably a little nuts, but I think he’s genuine when he says things like this: 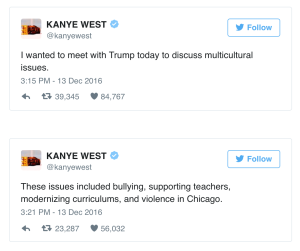 For all the wild things Kanye has said and done over the years, he’s usually pretty blunt about what he means. Now I’m under no illusions; Kanye and Trump are obviously two guys that nobody is really in any kind of grey area with how they feel about them. Hate em both, but its hard for me to fault a celebrity looking to work said celebrity status to get an audience with the next leader of the free world. Even more so when its to discuss issues that are especially prominent in his hometown of Chicago.

PS – Kanye, where is Waves?