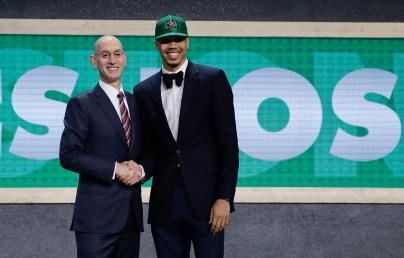 So after all the hype, the rumors, and the Woj Bombs I think a lot of people were expecting the Celtics to make a trade Thursday night, but ultimately they stood pat and drafted their guy Jayson Tatum at No. 3. Again.

Look I fully admit I’m not a college basketball expert so I wasn’t going nuts over who they should draft. It sounds like Tatum will be a good fit, a guy who can get to the basket and create offense on his own, which is exactly what the Celtics need.

But, now we’re hearing rumors about the Celtics STILL being in on a potential Paul George trade.

Take this FWIW: Hearing #Celtics in position to deal 4 George with 3-yr ext in place, but will depend on signing Hayward 1st. Lotsa dominos.

All I’m saying is, the last 3 years have been full of trade speculation and Wyc shouting from the rooftops to expect fireworks.

Well, I don’t know how much more of the “Celtics are in on player X” I can take. First it was Jimmy Butler (who got traded to Minny last night), then it was Paul George, then it was Kristaps Porzingis. In years past it was Kevin Love and Carmelo Anthony. Now everyone’s already got Gordon Hayward penciled into the starting 5 next season, despite the fact that he’d have to eat like $30-$40 million dollars to leave Utah. Its a merry go round and I’ve been on it way too long. I’ll keep my Woj notifications on, but I refuse to get hyped for anything until Woj tells me its happening. Anthony Davis is not walking through that door.