Grit and Balls baby. That was a vintage Celtics win that would make Kevin Garnett proud. Boston imposed its will on the Cavs and just beat them down for a 107-94 victory despite a monster game from LeBron. Now the series heads back to Cleveland on Saturday night with the Celtics holding a commanding 2-0 lead.

As back and forth as this game was, there were actually only 2 lead changes in the entire game. That really speaks to the Celtics just holding on for dear life as LeBron put up 42 points including an insane 21 points in the first quarter.

LeBron was using allll of the Infinity Stones in that first quarter as he was just unstoppable.

Despite that absolute show from LeBron, the Celtics were only down 4 after one due in large part to Jaylen Brown dropping 13 points himself in the first quarter. 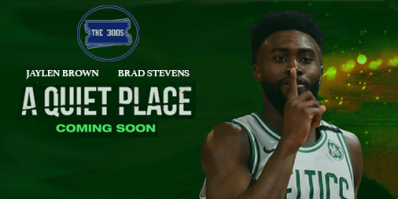 LeBron did give everyone a scare at the end of the 2nd quarter though after taking a shoulder to the head from Jayson Tatum. He looked a little woozy and shortly afterwards went back to the locker room for a brief moment. He came back just a couple of minutes later and did finish with 40+ points so he seemed to be fine. Was he milking it for the cameras? Ehhhh I think he might have been just a little bit, but its always difficult to tell with potential head injuries.

We do get this qualifier directly from NBA.com of when and why the C’s went on a huge run and won the game so thats fun.

Kind of leaves out the fact that LeBron only scored 4 points in the second quarter and elected to not play defense half the game. Really, it was a HUGE run after half time that was the turning point for the C’s who outscored Cleveland 36-22 in the third quarter and then never really looked back.

The Cavs also had TRIPLE the amount of turnovers as the Celtics with 15 to Boston’s 5. Rebounds were nearly even with Boston edging Cleveland 46-45 so the Tristan Thompson effect wasn’t nearly as prolific as many thought it may have been. Al Horford even finished with another double double (15 pts, 10 rebounds) despite having Thompson’s vaunted defensive attention.

The Cavs also got some bad news before the game when their coveted Brooklyn Nets pick, the crown jewel of the Kyrie Irving trade, turned into the No. 8 pick in this year’s draft. So Danny Ainge hoarded those Nets picks for *years* and then at the last second he jumps off the bandwagon and trades his last Brooklyn pick and it drops all the way to No. 8!

“We really traded Kyrie for the 8th pick in the draft??”#Cavs #Celtics #NBA #NBAPlayoffs #NBADraftLottery pic.twitter.com/NWk0fSs7iS

J.R. Smith always has been and always will be a scumbag. Late in the game Horford went up for a layup and Smith pushes him in the back sending Horford crashing to the hardwood behind the hoop. Even the broadcast team called it a disgusting, dirty play and called for a Flagrant 2 (Smith only got a 1).

Marcus Smart was ready to throw #ThemHands after JR Smith pushed Al Horford from behind 😬 (via @DefPenHoops) pic.twitter.com/KLczyvM32m

Smith was suspended 2 games for that sucker punch. Once a shithead, always a shithead.

Absolutely LOVE Marcus Smart getting right in JR’s grill too and letting him know that shit ain’t gonna fly, resulting in both getting technicals. Its a walking cliche at this point, but Marcus Smart just has that IT factor. Whether you want to call it energy, passion, grit, whatever it is, Smart makes this team remarkably better.

The TD Garden crowd was doing their role too with crystal clear chants of FUCK YOU JR, which was easily heard on the ESPN broadcast.

After that the Cavs checked out and called it a night. Even the national grab ass broadcast team was calling out the Cavaliers’ effort once the Celtics started putting the screws to them. Usually those takes are reserved for Boston talk radio in between Terry Rozier MVP calls.

“The #Cavs eye roll each other more than a couple in a bad marriage.” – Jeff Van Gundy #Celtics #NBA #NBAPlayoffs #CavsCeltics #CelticsVsCavs

We talked a lot in the past few days about how much deeper the Celtics are in terms of scoring threats. Just look at the Game 2 box score. LeBron went off for a monster triple double with 42 points, 10 rebounds and 12 assists. Kevin Love had a great game with 22 and 15. Other than that only one Cavs player even touched double digits and that was Kyle Korver with 11 points and Korver scored all of those in his first 9 minutes on the floor before going scoreless for the final 12 minutes he played. Not exactly the Big 3 LeBron is used to playing with.

Now holding a commanding 2-0 lead the Celtics head to Cleveland on Saturday night to try and put the nails in LeBron’s coffin. However, its a popular saying for a reason: you’re not in trouble in a series until you lose a game at home. While I think the Celtics are in prime position to win this series it is far from a lock because LeBron is legitimately Jason from Friday the 13th. Don’t just assume he’s done, make sure he is dead and buried before turning your attention elsewhere. I do not want to be having this conversation about the series being tied 2-2 this time next week.

Keep the foot on the gas and put LeBron away so he can get out of Cleveland, head west, and cede his rule over the East to this young Celtics squad. Bend the knee, LeBron.