You Are Watching a Master at Work in Vasyl Lomachenko 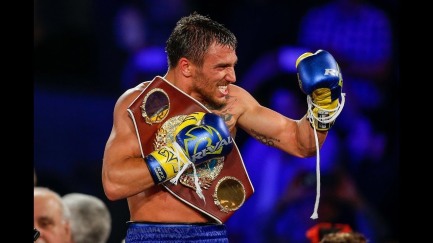 If records are made to be broken, what is history for? Color commentators, play-by-play announcers and analysts of all sports use the cliché often; “We are watching history.” What is sports history? Record breaking nights on the diamond? A back and forth NFL playoff game? Do we ever really know what will be dubbed “history” when it is happening? Aside from the obvious legendary moments like the 2004 ALCS series between the Red Sox and the Yankees, can we always pinpoint a certain moment or game or series as “history?”

An individual such as Michael Jordan had some pretty iconic moments throughout his career, a 60 point playoff game with the flu, monumental trash talk backed up by superb game stats. Did we know the most viewed moment of Jordan’s career would be a jump shot over Craig Ehlo in a playoff game 5 against the Cleveland Cavaliers in 1989? No way! So when I watch Vasyl Anatoliyovich Lomachenko fight, how do I know we are all watching boxing history? His fight IQ, his unorthodox training methods, and the compu-box numbers say so.

To the hardcore boxing fan Vasyl Lomachenko is already the greatest featherweight and lightweight in boxing’s history. While I refuse to pull the trigger on such a massive statement, I will concede that in only 12 (11-1) professional bouts he is the best of my generation, BY FAR! Yes only a dozen fights to pick through and being considered a great is totally unheard of but just like Slater from Dazed and Confused said: “It’s quality not quantity, man!” He was talking about the women he had been with, I am speaking on the strength of Loma’s record, it’s on steroids. 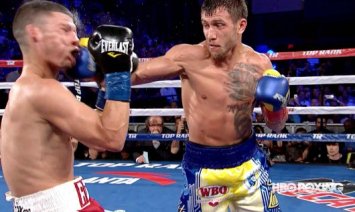 Lomachenko has fought seven current champions out of twelve career fights. Only one of his opponents had more than three career losses. Astoundingly the combined record of Loma’s first twelve opponents is 352-30. Yup, read that again. On top of that he has already won three different world titles: WBO feather and lightweight championship and he is the newly crowned WBA Lightweight champion. Whether he is defending or fighting the current champion a belt is usually on the line for “Hi-Tech.” In achieving all of this he has become the fastest fighter to hold a belt in three different weight classes, by eight fights! Compare that to the other boxing great of this generation Floyd “Money” Mayweather, whose first twelve opponents combined record was a puny 96-84, also he did not fight for a belt in those first dozen either. Excited yet?

From a “sweet science” standpoint the Ukrainian does everything perfect. His hand speed is second to none, his footwork is unlike anyone’s we have ever seen in boxing before or since, the angles and openings he creates and uses to set up combinations is godly. There is no comparison in the last 100 years to Vasyl Lomachenko, he is one-in-a-billion. The boxing unicorn. Coming into his most recent fight against Jorge Linares he had made his previous four opponents quit before the 8th round, all former champions. Not from the beating being too severe but because Loma has mastered the old boxing golden rule of hitting and not being hit. Annoying his opponents into submission, every older brothers dream. His training methods are strange but clearly effective, all of which are usually made by his father Anatoly Lomachenko. He trains his mind as much as his body and that is where he separates himself from the rest of the pack, or in his case, history.

The answer that boxing has been looking for since the downfall of Mike Tyson in the mid 1990s is here. He is the most exciting fighter to watch since Muhammad Ali danced like a butterfly into living rooms across the country and stung like a bee against his foes. A soft spoken, average sized man who moves like a dancer and thinks like a mathematician. Loma makes fraction of a second decisions in half the time needed and seems to always apply the correct technique and counter for every fight situation presented to him across his entire career. A career as a pro that I listed above is preceded by his two Olympic gold medals and his ridiculous 396-1 record as an amateur boxer. So where does a generational great go after only a dozen fights against champion after champion?

To the Mount Rushmore of his weight class course. Boxing is always good for knocking on the door of a retiree to remind them how old they are and offer them an offensive amount of money to try to derail a recently steaming hype train. In fact when generational greats square off, if the young fighter isn’t named Mayweather, the older fighter usually wins. For Loma the older fighter looks as if it is going to be fan favorite Manny “Pacman” Pacquiao. Both camps have been in serious talks for Manny to challenge Lomachenko for his WBO featherweight championship. Many fans want this fight but I would rather watch CSPAN for 16 straight hours. 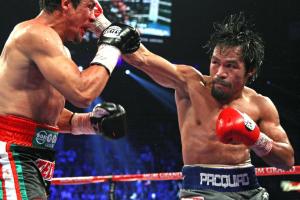 This is a lose, lose, lose/promotion – company win type of fight. Both fighters and the fans lose if this fight is made. For Vasyl Lomachenko this is not good for his career because Pacquiao is 5-4 in his last nine fights and currently holds no championships which would make “Pacman” a giant step back from the strong fighters Loma has fought thus far in his career. Manny Paciquiao isn’t on the same boxing or athletic level as Loma, even in his prime. This fight hardly has the allure that it would if Loma fought other active fighters closer to his age and current skill level such as Terrance “Bud” Crawford or Gervonte Davis. Nonetheless its seems as though the 39 year old Pacquiao is going to be next to step into “The Matrix” that is Vasyl Lomachenko’s ability.

At his best “PacMan” was a forward pressing power puncher and the style that fares the worst against Loma happens to be a forward pressing power puncher. Even if Pacquiao somehow has a technical revelation occur to his game he still has too many holes against a sniper like Vasyl. When Pac retreats he goes straight back instead of moving laterally, it has cost him more than one fight in his career and that bad habit would be where Loma will do most of his damage to the older fighter. Midway through the second round I can see Loma learning the timing and finding a rhythm against Manny’s persistent in-and-out power punching. Through frustration of being hit by Loma and not being able to return fire, Pac will overextend himself during the middle rounds which will either lead to a stoppage or cause the elder man to severely slow down if the fight were to somehow make it to rounds 9-12. “Hi-Tech” by 6th round KO or unanimous decision.

The only man who has a chance at stopping Loma within the next 2 years (yes, that short time frame) is Floyd Mayweather Jr. Otherwise Lomachenko has a clear and easy path to Living Legend status.

Who do you think can stop Loma?