With Isaiah Wynn Out for the Season, Scrutiny Intensifies on Patriots’ Poor Drafts

Last year the Patriots top pick Derek Rivers blew out his ACL and missed the whole season. Granted he was “only” a third round pick, he was supposed to be a solid young infusion of talent the Patriots were banking on. This year their top overall pick Isaiah Wynn just blew his achilles and is done for the year. Add that to the fact that they’re other first round pick this year in Sony Michel has missed the entire pre-season with a knee injury and the Patriots draft is looking like a shaky class already, at least in the immediate future.

My point here though is that the Pats have not gotten much out of the draft in the past several years, which is essentially playing with fire in today’s NFL. If we go back and look at the Patriots draft picks in the first 2 rounds over the past 10 years and the contributions they’ve gotten — it gets ugly. I took the first 2 round as the barometer as that is normally the elite young talent you expect immediate contributions from. Guys you’re getting in the later rounds are oftentimes lottery tickets and/or end of the roster players. Anyone that makes a significant contribution from late in the draft is a pleasant surprise, no more no less.

With that being said, lets take a look…

As you can see, in the last 10 years, the Patriots had great success in the first half of the decade, drafting guys like McCourty, Solder, Mayo, Gronk etc. But in the past 5 years (not counting the 2018 draft) the Pats have exactly ONE of those players still on the roster in Malcolm Brown who is solid but unspectacular. 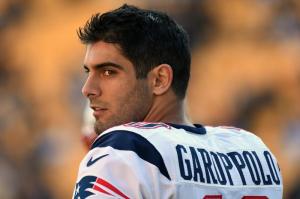 And for the guys that were actively traded away, the Patriots have not received great value in return.

It obviously doesn’t help that three of the last 5 years the Patriots didn’t even have a first round pick due to various reasons, trades, and league mandated penalties from absurdly overblown alleged incidents. This is not a great way to build a deep roster guys.

Your team is built around that young talent because you can’t overpay for everyone. With guys like Logan Ryan, who was formerly the third CB on the Pats, getting $30 million contracts — you rely on young cheap talent to flesh out the rest of the roster. But the Patriots have failed to do that over the better part of the last decade.

That is how we find the Patriots suddenly with the fourth oldest team in the league at an average age of 26.7. The cabinets are bare my friends and most of that is masked by Tom Brady being the goat.

Part of the problem here is the high risk/high reward approach the Patriots tend to take in the draft. Because they have been set at quarterback for the better part of the last 2 decades, they have been able to take some big swings (and misses) on risky players. Taking Rob Gronkowski in the 2nd round with a bad back was a big risk because he was just coming off a missed season due to back surgery. But obviously that paid off as Gronk, when healthy, has turned into arguably the greatest tight end the league has ever seen.

But then there are cases where the team is taking risks in the 1st Round on guys with pre-existing injuries and unsurprisingly those same injuries pop up and the guy never makes an impact. Easley was a guy with two bum knees coming out of Florida and never made an impact with the Patriots because he was always battling, yup, knee injuries.

So it should come as no surprise really that the Patriots lack a core of young, elite players on the roster. All of their best players are on the back 9 of their careers; Tom Brady, Rob Gronkowski Devin McCourty, Julian Edelman. They had 2 players in the NFL Top 100 (Gronk and Brady) and exactly 0 players on ESPN’s top NFL players under 25 years old.

Listen this team will be good as long as Brady is upright and pliable in the pocket and Gronk is on the field. But probably not a second longer. With each passing mediocre draft, I am less and less confident that this team will be all that good the second Brady and/or Gronk call it a career.