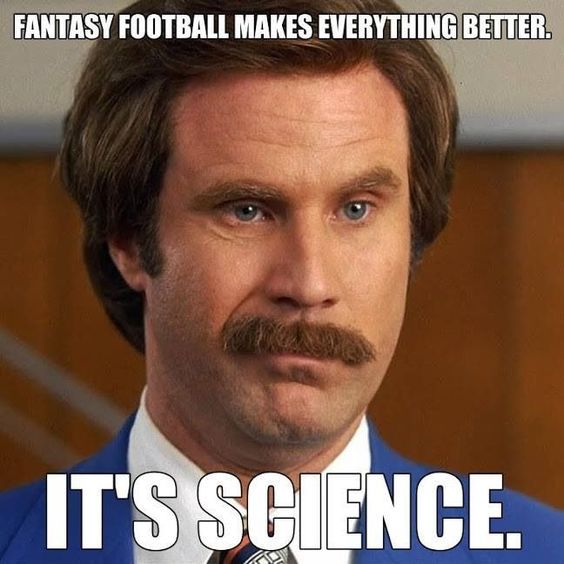 Not only have we officially reached the most important week of the NFL preseason, but these next two weeks also mark perhaps the most important time of the year as a fantasy football owner. Unless you are a masochist that likes to watch one of your top draft picks blow out a knee in the preseason Week 3 dress rehearsal, or see one of your “sleepers” get the pink slip before final cuts are even made, there is no way you should have had your fantasy draft by now.

If you’re like me, you’ve got your draft scheduled for one of the next two weekends – I’ve actually got one draft on each of the next two Sundays – and if you haven’t been doing your homework by now…well, quite frankly you’re screwed.

There are also plenty of other ways to screw yourself before the season even begins. (For more examples of such, check out Red and Big Z’s “Fantasy Football Follies” podcast from last week.)

But perhaps one of the biggest ways to hurt yourself, other than drafting too early, is being too much of a homer. Look, nobody loves the Pats more than me – which I’m sure you could all tell by now – but you’ll see me donning Jets gear before I even think about drafting any Patriot besides Gronk within the first two or three rounds.

Do NOT be this person:

Still, I will admit that, yes, it is fun to have some of your hometown heroes on your squad, and I’m not saying you can’t make that happen. You just have to make sure you do it the right way, and ONLY IF the cards fall in your favor.

So, for all my fellow Pats fans out there, here’s a quick ranking of the team’s top fantasy-relevant players in 2018 and where you should be looking to snag them:

(Side note: Rankings are based upon a 12-team, half-point-PPR scoring system. All average draft positions [“ADP”] are courtesy of FantasyFootballCalculator.com) Gronk is the only Patriots player who can truly give you an unquestioned advantage over your opponents each week, as this guy is in his own tier when it comes to the tight end position. While he has finished with 80-plus catches in just two of his eight seasons in the league, that’s not where his value lies. As everyone knows, Gronk is a touchdown machine, the likes of which the game has never seen at the position (or perhaps any position, for that matter), and compiles receiving yards comparable to some WR1s. Taking away the seasons in which he played less than 14 games, the man has averaged 1,051 yards and almost 12 touchdowns a year. Yes, the guy is definitely an injury risk, but it’s a risk worth taking in order to obtain a stranglehold on a position in which its difficult to find a stud outside of the top three or four players. I’d even consider drafting Gronk in the middle of the second round. So draft away, Pats Nation. Go grab Gronk, and do it early.

With the suspension of Julian Edelman and the departure of Brandin Cooks, Hogan will be Brady’s No. 1 option at the wide receiver position to start the season – and could possibly remain the top wide-out even after Edelman comes back in Week 5. Hogan is easily the team’s best red-zone target outside of Gronk and should see an improvement upon the five scores he had in 2017. People will be quick to point out that he only had 34 receptions last year, which, in a vacuum, looks terrible. But he also only played nine games last year after a freak shoulder injury, and, most importantly, he has MUCH less to compete with this year for targets. Brady is going to need to force-feed Hogan, especially in the early part of 2018, and he could be a fine WR2.

There’s really not much that needs to be said here. Besides Aaron Rodgers, there is no more reliable QB in the game, in both fantasy and real-life. You know that with Brady you’re guaranteed to get at least 30 touchdowns and 4,500 passing yards, at minimum. He’s not going to get you anything on the ground, but honestly who cares? The only thing I’d say is that I am usually not a proponent of drafting a QB until the later rounds, as having a top-flight signal-caller really doesn’t give you as much of an advantage over your opponents as studs at the other skill positions. But you can feel good taking TB12 from the fifth round on.

For a guy who suffered multiple injuries in 2017 and has missed the past few weeks of practice due to a “slight tear” in his knee, Burkhead has been skyrocketing up draft boards lately. It’s actually not too surprising, as the injury is (supposedly) minor and, according to reports, he could have played against the Eagles last week if it were a regular-season game. Either way, he still looks like the top dog at the position with rookie Sony Michel still sidelined with his own knee issues. The guy also had eight touchdowns in just 10 games last year and really came on strong toward the end of the season. He can handle the rock between the tackles and catch the ball out of the backfield, giving him value in both standard and PPR leagues. An 1,100-plus-total-yard, 10-touchdown season is truly not out of the realm of possibility. In fact, if Burkhead stays healthy all year, I can actually see him returning third- or fourth-round value. I’m a big fan of Sexy Rexy this year.

PROCEED WITH CAUTION. I know everyone’s excited about the electric rookie from Georgia after the Pats surprised everyone and took him with the 31st pick in the draft this year, but there is a ton of risk involved here. First and foremost, besides Laurence Maroney, rarely has Belichick ever put much trust in rookie running backs, and even without his long history of knee issues – which date back to high school  – Michel was not going to be the next Ezekiel Elliot. Now the kid hasn’t played in weeks after a small procedure aimed at resolving a “minor” issue with, you guessed it, his knee, has kept him out a little longer than initially reported. While he’s still on track to be ready for the start of the regular season, knee issues don’t just “go away.” If he stays on the field, though, he could be a nice piece. After all, he averaged an absolutely insane 7.9 yards per carry in the SEC last year and scored 17 total touchdowns. But for now, I’m not touching the guy with a 10-foot pole, especially in PPR leagues (64 total receptions in four years at Georgia). I’m obviously hoping for the best, but let someone else in your league reach for him this year.

Since 2013, there has perhaps been no better possession slot receiver in the NFL (besides maybe Jarvis Landry). In terms of targets and overall receptions, Jules has dominated both when it came to Brady’s favorite targets, and it’s not even close. However, Edelman is now 32 years old, missed all of last season with a torn ACL – after already missing almost half the year due to injury in 2015 – and, though he looked OK during last week’s preseason game against the Eagles, he has looked frustrated at times this offseason. Oh, and there’s the fact he’s set to miss the first quarter of the season due to suspension. He’ll most likely become the target-leader once again after he returns in Week 5, but the year-and-some-change layoff from playing with Brady could have an effect. He’s also not going to get you a ton in the way of yards and touchdowns, and he isn’t as valuable in standard leagues. Still, I think Edelman produces enough to be a low-end WR2/high-end WR3 this year, and his current ADP sounds pretty accurate if you’re willing to eat the first four weeks.

After Edelman, there’s a pretty big drop-off in terms of Patriots fantasy relevance, with my boy James White currently clocking in around the 13th round. White is one of those guys who, while capable of having solid fantasy games, is much more of a real-life asset. He is the team’s unquestioned passing-down back, receiving at least 70 targets and at least 50 catches over each of the past two seasons. Though he could receive a bump in ball-carrying opportunities this year, especially considering both Burkhead’s and Michel’s injury history, he’s not going to get you much between the tackles. He could be a solid RB3/4, depending on your league, but in no instance should he ever be a weekly starter. Basically, it comes down to this with White: If you’re in a half-point PPR, take him here; if you’re in a full-point PPR, I might even take him a few rounds higher; if you’re in a standard league, leave him alone.

Other than that, while there may be some outbreak performances from some of the under-the-radar guys, there really aren’t many other Pats you should be targeting on draft day. Keep an eye out for them on the waiver wire when opportunity strikes, but for now I wouldn’t touch them.

Best of luck to all my fellow fantasy nerds over the next few weeks – unless you’re in one of my leagues, of course – and be sure to let us know how you like my rankings in the comments below.