ESPN – The New York Jets have a new starting quarterback and a new face of the franchise.

Rookie Sam Darnold was officially named the starter Monday, coach Todd Bowles announced. He will become the youngest opening-day quarterback in NFL history. He will be 21 years, 97 days old when the Jets travel to play the Detroit Lions next Monday night.

Since my brain only works in fragments of movie quotes and pop culture references, lets set the table for this story first.

The Jets are going to make the newly minted 21-year-old, Sam Darnold, the youngest Week 1 starting QB in the history of the NFL.

The Jets went 5-11 last year with one of the oldest starting QBs in the league in Josh McCown aka Dolph Lundgren. 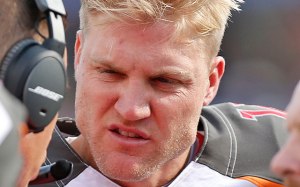 So it should come as no surprise the Jets turned to the No. 3 overall pick sooner than later to take over under center. Could a guy who just became old enough to buy a beer use a little more seasoning before suiting up for one of the worst teams in the league? Yea probably, but I guess if you’re the Jets whats the difference? You won 5 games with the veteran last year and that 5-year contract clock is already ticking so why redshirt the rookie?

Darnold looked like a lock to be the No. 1 overall pick after his redshirt freshman year at USC throwing for 31 TDs with only 9 INTs, 3086 yards, 67.2 completion % and a 161.1 passing efficiency rating. His numbers dropped pretty  much across the board though in his second and final year as a starter at USC. He threw less TDs, threw more INTs, had a lower completion % and a worse passing efficiency rating — so that would concern me.

What would also concern me is where the guy went to school. University of Southern California. Not exactly a beacon for future NFL QBs and its where the Jets have some experience.

Side note: I was at that game!

But in all seriousness, USC has produced only one real viable NFL starter in Carson Palmer. The rest of the USC signal callers turned into serviceable at best NFL QBs; Matt Leinart, Mark Sanchez, Matt Cassel, Matt Barkley, Cody Kessler, and John David Booty! Not a lot of Pro Bowls in there.

Who knows though? Picking a QB in the NFL is a total crapshoot. With my luck he’ll turn into the next great quarterback stud and will haunt me for all the fun I’ve had at the Jets expense over the past 18 years.