The Patriots Got Poached by the Jaguars Yesterday

Sunday was an ugly day for the New England Patriots. I was feeling pretty confident heading in and since I was in the great state of New Jersey I even placed a legal wager on my boys to pull it out. Welp, midway through the first quarter I knew I wasn’t getting that money back ever again. What seemed like a steamrolling by the Jaguars was a game that actually pivoted on just a handful of plays and missed opportunities, which I have painstakingly compiled below. Andddd go!

-Gostkowski missed another bunny in a key moment. Yuck, this guy is basically Tuukka Rask to me these days. He’s not as bad as sports talk radio says, but he’s definitely not as great as the team would have you believe. I know it’s only a handful of kicks he’s missed over the years, but they all seem to stick out in my memory because they all came in key situations. Regardless of his FG percentage, I do not want this guy anywhere near a game tying or game winning kick anymore.

-Refs missed a holding call against Gronk (and a potential roughing the passer) and the Pats were forced to kick on 4th down on their first drive, which as we mentioned above Gostkowski shanked with an absolute duck of a kick.

Gostkowski sends it OB right as Patriots end first drive pointless. Either the Telvin Smith jersey tug or Ngakoue “weight drop” should have been drive-extenders.

-This defense looked like swiss cheese all day, which is alarming, but it would be out of character for any Patriots fan to completely overreact. We’ve seen these early season losses when the team is still trying to figure it out. Whether it was the offensive line or the right linebacker rotation, we’ve seen it before and this year is probably no different especially when it comes to the wide receivers. Hell the Pats are like the high school jock who got a little too high on himself and dumped a perfectly nice girl (Kenny Britt), only to try and get her back after he’s put on the freshman 15 at college.

-Eric Rowe got roasted all day long. One of the plays against him was impossible to stop:

Banana hands. Nothing you can do about that. 🍌 🍌 🍌 #Patriots #Jags #NFL pic.twitter.com/vV6mJOYjpQ

But he then immediately got beat for a TD he should have been able to defend.

-The defense got burned on 3rd down all game long as Bortles scrambled and found an open man or ran for first downs himself. Hell he’s got the third highest Avg Yards per Rush for a QB in the history of the league, just a tick behind Michael Vick.

-The defense was bad yes, but lets remember that it took a career day from Blake Bortles (29 of 45 for 377 yards, 4 touchdowns, 1 interception). Literally the best game of his career to topple the Patriots, which kind of stung after I clowned Bortles all week long and lost a little coin in the process, but hey thems the breaks.

Hey, at least this defense can lay the wood:

Duron Harmon recovers a Jaguars fumble to help set up the first Patriots TD of the day! @dharm32 #NFLKnights pic.twitter.com/lA4grOkewq

-How about Tom Brady and Josh McDaniels losing their shit on the sidelines in the first half?

Live look at me in my living room watching this game. #Patriots #Jags #NFL pic.twitter.com/CXhQrfovzi

Thats the most concerning visual from the entire game. It kind of felt like Brady and McDaniels were starting to worry that this team might not be able to get them where they want to go. Hopefully it’s just the two of them blowing off some steam on the new guys making mental errors.

-Breathe and say it with me….Julian Edelman will be back in 3 weeks.

-I’m pretty sure Mattes and I have stumbled onto some black magic as the two guys we picked for team MVPs on The 300s Podcast, Rex Burkhead and Trey Flowers, have each gotten concussions in the first two weeks. Another guy Mattes picked as a DPOY was Deatrich Wise, who left the game late with what the announcers speculated as some jumbled finger digits. I’m not comfortable with this type of power.

-At one point midway through the second half the broadcast team pointed out that it had been a full 45 minutes since Tom Brady had thrown the ball. That cannot help gameflow and momentum.

-The non-call of the Jags jumping offsides on 4th down late in the game as the Pats tried to draw the penalty before punting. As the broadcast team, and TV shots of a fuming Belichick pointed out, the offensive lineman needs to touch the the defender if he jumps onside otherwise he can reset and the refs won’t call it. Romo even pointed out in the replay you can see the official reach for his flag before deciding against it. That one hurt.

-Before the season I predicted the Pats would split with the Jags and the Texans and be 3-1 after the first month. After Week 2, we’re exactly where I expected so unless they drop a game to the Lions and old friend Matt Patricia

or the Dolphins, who tried their very best to give away a W to the Jets on Sunday, then we’re fine.

-Don’t get it twisted, this defense is somewhere between hot garbage and a cold lunch, BUT its probably a little bit better than the defense that was one stop away from winning back to back Super Bowls last year. So it may not always be pretty, it will probably be infuriatingly bad at times, but at the end of the day it should be good enough to keep the team alive as long as TB12 is under center…..and not a second longer.

-After predicting the Pats would do their best to eviscerate Jalen Ramsey for trash talking Gronk (I may have said something about making his children orphans, but I forget) and they did nothing of the sort. The offense could not get into a rhythm and anytime they did, their momentum was killed by turnovers and missed kicks.

-Cordarrelle Patterson killed a drive when he tripped over the Ghost of Christmas Past on a key third down. After the Pats defense came up huge and forced a quick 3 and out, the offense came out onto the field and these next two tweets came over the span of 6 minutes.

A short series and a terrible punt. The #Patriots have to smell blood here. #Jags

Come on Cordarrelle, be an athlete for me one time. #Patriots #Jags

Patterson caught a screen out of the backfield and looked like he had room to run, but his feet would not cooperate as he tripped over nothing and fell down to end the drive in its tracks.

So I just have to tip my cap to the Jaguars. It’s only Week 2 so I hope they aren’t riding too high…. 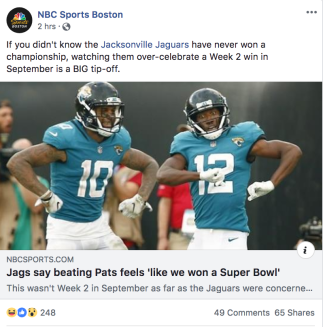 “It kind of felt like we won a Super Bowl, man,” safety Tashaun Gipson said. “I won’t even kid you. It was that type of atmosphere and environment.

-Josh Gordon?? I say yes because of the pure ability coupled with the age; 27 whereas Dez Bryant will be 30 soon.

But obviously the guy has been dealing with issues for years. The last, and only, good season Gordon had came back in 2013. Back when Shane Victorino played for the Red Sox. Tom E. Curran makes a pretty compelling argument against the receiver as well:

He’s played in 11 of a possible 65 games since his absurd 2013 season (86 catches, 1,646 yards). He needs full-time supervision, it seems. Permissiveness, understanding and contorting for Gordon’s needs all offseason got the Browns . . . a game. One catch. A touchdown. And then they threw up their hands.

How’s that return on emotional investment and time spent? Not real good. It’s not inhumane to tell a troubled person he is unemployable, which Gordon has been and seemingly still is.

Besides, the Patriots were already down the road with one wide receiver project, Cordarelle Patterson. Then they added Corey Coleman this week.

If feels like they are at capacity when it comes to getting talented but hard-to-reach downfield receivers assimilated. This isn’t July when there’s nothing to do but conditioning, working on timing and getting on the same page. There are games every seven days now, game plans to install, fine-tune and execute.

The reality is, nobody’s got time for Josh Gordon right now.

Despite all that, the Patriots are at least doing their due diligence on Gordon according to Bert Breer.

AUDIO: @AlbertBreer tells Bertrand and Gasper that the #Patriots are doing research on Josh Gordon’s availability.https://t.co/sssj5O0LNh

So that may have been more than just a few pivot points, but I think its just an early season misstep for the Pats (one that I expected) as they build for the longterm and assess what their strengths and weaknesses are. Plus I feel much more confident going against the Jags in the playoffs going for the split, rather than trying to beat Sacksonville twice in one season.

Up next is old friend Matt Patricia and my worst fantasy draft pick in a decade; Matt Stafford.