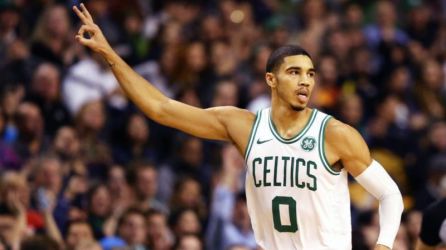 So the Celtics have been getting a lot of love on ESPN’s Top 100 Players ranking they’ve been slowly releasing over the past couple of weeks with 6 (and counting) players cracking the list. But, what has me all jazzed up is the hype around my boy Jayson Tatum. After an excellent rookie season, Tatum looks ready to take the next leap into superstardom and ESPN seems to agree.

A quick explanation of how ESPN ranks these players:

“NBArank is a prediction for the coming season. Dozens of panelists from across ESPN, The Undefeated and FiveThirtyEight — TV analysts, reporters, editors, producers and researchers — voted to forecast which players would be best in 2018-19, taking into account both the quality and the quantity of their contributions.”

Before we get to Tatum, lets take a look at the full breakdown of every Celtics players that made the list. (ESPN has yet to release the Top 20 players yet so obviously Kyrie Irving is in there somewhere.)

Here’s what ESPN had to say about Tatum as we gear up for his sophomore season.

“Tatum evolved from role-playing starter into playoff closer, calmly averaging 18.5 PPG in 19 postseason games, looking like a longtime star in the process. With Kyrie Irving and Gordon Hayward back, it will be interesting to see if Tatum is asked to take a backseat.

Given Brad Stevens’ willingness to put his five best players on the floor regardless of position, I wouldn’t expect Tatum’s minutes to decline. He can play some small-ball 4 and has proved he can remain efficient without volume. With that said, it wouldn’t be surprising to see him get fewer opportunities given Boston’s multitude of weapons”

Now before we all crown the Celtics champions lets remember it’s still September so anything can happen. Guys can take a step back, players can shatter their ankles, or another Super Team could rise out of the ground, but this Celtics team looks special. Not only are they chock full of talent, but they are so, so flexible that its scary. Just about every guy in their starting 5 can switch onto almost any position on defense. Jaylen Brown and Jayson Tatum could probably stand next to each other and cover the entire width of the basketball court. Or just give them the ball and get out of the way as we saw in the playoffs last year. Horford is the ultimate facilitator and we haven’t even seen this team play with Gordon Hayward yet.

ESPN’s Zach Lowe is even more hyped about this team‘s potential than I am:

“This quintet is the most exciting group since Golden State stumbled into the Death Lineup: Kyrie Irving, Jaylen Brown, Jayson Tatum, Gordon Hayward and Al Horford.”

Them fighting words. The Death Lineup is essentially the most efficient lineup in NBA history by most metrics. The Death Lineup is just lethal from any position as it features a starting 5 of Stephen Curry, Klay Thompson, Kevin Durant, Andre Iguodala, and Draymond Green. So to be compared to that?

Still not enough Celtics love for you? Alright lets pump their tires even more with these excerpts. Anddd go!

Brian Windhorst: “I’m bullish on Jayson Tatum’s future. (I know, join the club.) I think he has an outside shot to be a top-10 player next season.. I think the guy is an absolute stud in the making…I think he’s still ranked too low. I see him and the Celtics as having huge seasons.”

Not to mention Tatum has been studying and practicing with some guy named Kobe Bryant so that may help him improve even further. Kobe has embraced the mentor role much better than I thought he would in retirement and thats a game changer for Tatum who has essentially modeled his entire game around the Hall of Famer.

Just a quick reminder that the Celtics are back on the court and playing organized basketball once again in just seven days. Then the regular season, and the sky high expectations that go along with it, kicks off October 16th at home as the 76ers come to town.