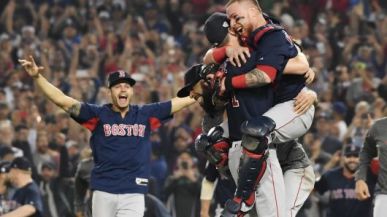 Some things really do feel pre-ordained. This championship is certainly among them. As soon as we crossed off the Yankees and, apart from an 18 inning long intermission, made fairly easy work of Houston, I just didn’t see a way we lost this. So here is my list of the 5 most important people to this championship, the five we owe it to the most.

I remember the first time we saw this guy get up in the pen in the fall and said aloud, “Our answer is Nathan Eovaldi, we are completely fucked.” He was a rolling stone of a pitcher who gave us a few good starts down the stretch but should  not have been anywhere near a bump come the playoffs. Well, all that rolling stone did was give us every drop of blood, sweat, and tears he could , eating inning after inning to keep the rest of our staff (somewhat) in tact.

Bradley has sort of been accepted for what he is. He covers an entire outfield on his own, has a rocket of an arm, but at times might as well head to the plate without a bat. That changed this post-season. Although he was played less in the LA series, JBJ had a number of key hits, including the game tying HR in the 18-inning  loss that will now be forgotten. We owe a huge part of this banner to the Sentinel in Center.

David Price is a whiny, maddening, inconsistent weirdo. He also just won us the World Series. He got hot when he needed to get hot and because the ruthless, flame-spitting starter, the descendant of Schilling and Beckett, that we needed him to become. And not a moment too soon. Cheers, David.

Think I forgot about him? Stevie Longball just refused to let his opportunity at a ring slip away, channeling all the magic his 35 year old body could and slugging his way to  eternal October glory.

This is sort of a cop out but needs to be said. The truth us the Red Sox are raising their 4th banner in 15 years because of a classic Boston sports effort. Everyone did their part, everyone had their moment. From Barnes to Nunez, from Kimbrel to Devers, from Kelly to, yes, Ian fucking Kinsler. They all came together when it mattered most.