It’s the third straight for Betts in right field. Kinsler got his second Gold Glove at second base, and Bradley won for the first time in center.

Press play to get the full Gold Glove experience

The Red Sox continued their winning ways last night as they took home two (three if you count Ian Kinsler) Gold Gloves to go along with their recent World Series hardware. The recipients of those golden trophies were none other than center fielder Jackie Bradley Jr. and right fielder Mookie Betts. Two-thirds of the Earth’s surface is covered by water, the rest is covered by JBJ and Mookie.

Seriously though, for all the talk about how elite Boston’s outfield defense is, this is a great rubber stamp on a season filled with insane defensive plays. JBJ has a rolodex of SportsCenter Top 10 plays…

Chris Sale can’t believe JBJ made that catch and neither can we. 😱 pic.twitter.com/Bi2QHfqPDy

ARE YOU SERIOUS?! JBJ with the INCREDIBLE catch.

There’s a 0% chance anyone should catch this ball…besides JBJ pic.twitter.com/pFJCpJalAL

But Mookie’s most recent web gem may take the cake with his ALCS Game 4 game saving catch, which he didn’t technically catch.

As we all know the umps ruled the batter was out on fan interference. Let me repeat that. The ump ruled that if not for some guy in the first row Mookie Betts, without a doubt, makes one of the greatest catches in postseason history. That, my friends, is a gold glove. What doesn’t hurt his case is the fact that he essentially made the same play the next night in Game 5.

Not to mention, for a guy thats only 5’9″ and 180 pounds he has a cannon for an arm. You legitimately cannot run on this man.

Mookie Betts does it ALL including mowing guys down who think they can run on him 💪🏻#RedSox #Astros #ALCS pic.twitter.com/dH31GvdvbI

You would think for a team with two Gold Glovers patrolling the outfield grass, the third guy would just be some hulking slugger who can’t bend over to tie his own shoes. Nope. Instead they got this guy: 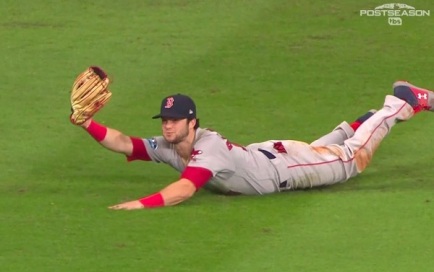 Good luck getting a bloop single past these three guys over the next decade.