TMZ – Stan Lee, the man who co-created Marvel Comics, has died … Stan’s daughter tells TMZ. We’re told an ambulance rushed to Lee’s Hollywood Hills home early Monday morning and he was rushed to Cedars-Sinai Medical Center. We’re told that’s where he died. Lee had suffered several illnesses over the last year or so — he had a bout of pneumonia and vision issues.

Stan started Marvel with Jack Kirby in 1961 with The Fantastic Four. He went on to create Spider-Man, Black Panther, The Incredible Hulk, X-Men, Iron Man and The Avengers. Stan made cameo appearances in all of the Marvel movies.

Wow, what a sad and sobering headline to write. He was 95-years-old so he lived a long and incredibly successful life, but still a sad thing to see. Stan Lee made comic books cool. Fact, not opinion. Sure Kevin Feige deserves a ton of credit for nailing the formula for making a good superhero movie, but it was all based on Stan Lee’s work. Even before all the blockbusters, there were the 90s cartoons like Spider-Man the Animated Series. 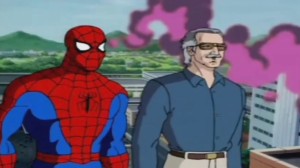 But just think about the creative juices you need to have in your brain to create Spider-Man, the Hulk, Black Panther, the Fantastic Four, Iron Man, and the freaking X-Men! The guy was a genius and a lot of his comics touched on some pretty sensitive subjects way ahead of their time. While the underlying message of X-Men has become abundantly clear over the past couple of films, at its core this was a story that tackled civil rights and how they were granted to some types of people, but not others. Whether that was mutants, gay people, transgender, African Americans etc. – it was a pretty radical thing to write about when the X-Men were first created in 1963.

So Stan Lee was a wildly successful guy who created some of the most iconic characters and intellectual property of all time. The only sad part is that Disney just bought FOX and all its Marvel character rights, which is why we’ve only recently started to see crossovers like Spider-Man finally joining the Avengers. So unfortunately Stan Lee won’t get to see all his kids playing on screen together. I’m not sure what Marvel will do to honor the godfather of comic books, but after having a cameo appearance in every single Marvel movie, I’m sure it’ll be something special.