So it looks like there’ll be a lot less facial hair and excessive body-leaning in the ninth inning for the Sox next season. (Seriously, though, Kimbrel’s pre-pitch shtick drives me NUTS. I don’t exactly know why, but I’ve always hated it.) 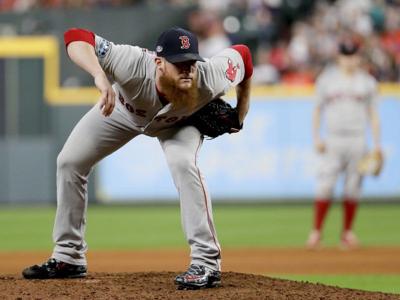 On Monday, Sox GM Dave Dombroski issued this little nugget about the 30-year-old free agent and the likelihood of him being back in Boston next season:

Dave Dombrowski on closer position/Craig Kimbrel: “Our payroll is pretty high at this point. So without getting specific on him, we’re not looking to make a big expenditure in that area. So read that as you may.”

Even though this technically doesn’t mean anything for certain, Dombrowski’s always been pretty direct, and he’s typically not one to beat around the bush. His comments yesterday combined with the fact that Kimbrel is allegedly looking for a six-year deal (LOL!!!) pretty much signals the end for the bearded one’s time in The Bean.

Easily the game’s top closer for the first five years of his career in Atlanta (186 saves and a 1.43 ERA in 289 innings), Kimbrel has been a bit up-and-down since, hovering between above-average and dominant for the past four seasons, the last three of which being with the Sox.

With the Sox, Kimbrel has seen his seasonal ERA go from 3.40 to 1.43 to 2.74, further demonstrating the inconsistency he’s shown ever since leaving the Peach State. Such is the risk you take with most flamethrowers as they get older, and overall his time in Boston was likely more “good” than “bad.”

BUT there’s no denying the fact that he was atrocious this past postseason, sporting a 5.91 ERA and allowing 19 baserunners in just 10.2 innings pitched. (And this was after a season in which he sported the second-highest walk rate and the highest home-run rate of his career.) Somehow, he never technically blew a save in October, but he certainly wasn’t one of the reasons the Sox won the Series this year. In fact, he was probably one of the main reasons why they could’ve just as easily lost.

But again, I’m not trying to tear the guy down on his way out. After all, he was pretty damn good at times here, and when he’s on his game he can be downright untouchable. However, he’s not “six years” or “$16 million per year” good anymore, and I agree that it’s time to part ways.

I’m with ya on this one, Dave. Now who are we gonna get to replace him?