Once one of the most dominant pass-catchers the game has ever seen, it appears as though Rob Gronkowski is quickly nearing the end of the line.

Not only has this been apparent from just the eyeball test alone, but rumors that he is once again considering retirement resurfaced yesterday as well – even though Gronk tried to downplay everything after the team’s victory over L.A.

Even the numbers don’t lie, though; since his misleading eight-catch, 107-yard performance against Miami in Week 14, here’s how it’s gone for Gronk ever since:

OH, and he’s also scored a total of zero touchdowns since the game down in Vice City as well.

There’s much more to take away from those numbers, though, besides simply saying that “Gronk looks cooked.” As a consistent, big-play, receiving target? Yeah, maybe he is cooked in that regard. But Gronk’s still played over three-quarters of the snaps – or more – for the past month, and Bill obviously isn’t going to keep him in there if he’s not providing something for the offense.

And that “something” that he provides has been excellent blocking up front. He’s basically been acting as a sixth offensive lineman for much of his time on the field lately, and it’s working.

This is not to say Gronk hasn’t been used as a blocker before; he’s actually been one of the game’s premier blockers at the tight end position throughout his whole career. However, the rate at which he’s been used as a blocker as opposed to a receiver has increased significantly. In 13 games last year, Gronk ran a passing route on 90.3 percent of his snaps, receiving 105 total targets; in 13 games this year, he’s been asked to go out for a pass on just 77.8 percent of his plays and has seen just 72 targets. 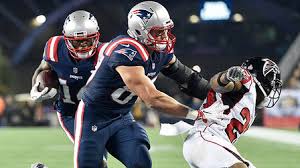 This guy has been getting it done on the line for years.

It should also be noted that the Pats’ rushing offense, which finished 10th in the league last season, jumped all the way up to fifth in 2018. Some may try to point out that we didn’t have Sony Michel last year, but we did have a guy named Dion Lewis, who averaged a pretty damn solid 5.0 yards per carry in 2017. So, no, it’s not all because of Sony Michel. (Yes, new addition Trent Brown and the rest of the O-line has played exceptionally well this year, too, so it’s not all Gronk. But still.)

Even Brady himself couldn’t stop from gushing about the big fella after yesterday’s game (h/t 247 Sports):

“Yeah, he’s a great blocker,” quarterback Tom Brady said after the win. “I think that’s something that goes maybe a little under the radar with his skill set, but he’s one of the most dominant blocking tight ends in the league. Again, he’s a threat when he catches it. Just did such a great job there to start the third quarter. He’s a threat any time he’s out there.”

And, as I pointed out in yesterday’s postgame piece, his epic block on Sony Michel’s 40-yard second-quarter run was the whole reason that play was even possible:

It might be hard to get a great view of No. 87’s stone-walling at first, but watch the bottom center-to-left corner of the screen, and you’ll eventually see the Chargers’ Kyle Emmanuel (No. 51) looking like an overpowered otter trying to swim upstream in the rapids. He had NO CHANCE of touching Sony on that play, and it was all because of Gronk.

He then did it again, to the same poor soul, on Rex Burkhead’s touchdown run just three plays later:

Another great block for Rob Gronkowski to help the running game. #Patriots pic.twitter.com/7YujCvEDny

Of course, the Patriots are better with a healthy Gronk as the All-Pro tight end he used to be, but they certainly aren’t as desperate as some make it out to be without him. The team has averaged over 407 yards of offense (!) over the past four contests; the sky ain’t falling, folks. Relax.

In a season during which it’s been easy to hop all over Gronk for his “poor” play, I had to give the man the shine he deserves when doing the little things we don’t always catch during the flurry of action on the field.

You’re still a huge part of this team, Gronk. And if the team is going to be hoisting up that sixth banner next season, it certainly won’t happen without you on the field.