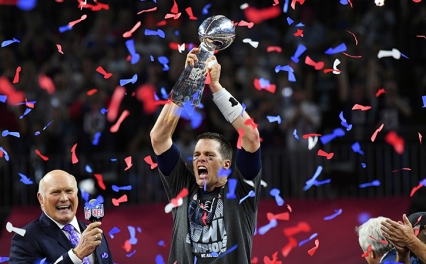 ProFootballTalk – The New England Patriots on Sunday won their 127th game since 2010, which makes this the winningest decade in NFL history. Breaking a record set by the Patriots last decade.

Strength of schedule. Strength of division. In-season injuries to opponents. I feel like every year opposing fans have a different excuse as to why the Pats succeeded that season, some barely tangible proof that they aren’t as good as meets the eye.

Well, through the past decade, where over at least 160 games I would think the variables involved in all 32 NFL teams’ success cancel each other out to an extent, the Patriots have won more than any other team in NFL history. Over a full ten years, they have had more success and earned more victories than any previous team in that same, long, frame of reference. They won 127 times.

O, in case you were wondering whether or not the Patriots were truly a dynasty? I mean sure someone is trying to form as argument stating that this sustained success was is sort of smoke and mirrors. I mean we did go what, 10 years between Super Bowls? Sure. But the previous most successful team decade over decade? That would also be the Patriots, of the decade prior. From 2000 through 2009, we had 126 wins. In summary, we’ve had 20 straight years of running shit in the NFL AND I CANNOT WAIT for people like poor Bobby Kravitz to call the wambulance about a guy with a video camera and a few underinflated footballs. Because I am SURE that is how we’ve logged 253 wins since George W. Bush’s presidency began.

As we enter, as we seemingly do every year, the most important week of our football fandom careers, let’s quickly reflect. For those of us old enough to remember, times weren’t always good. We had some shitty teams, man – Drew Bledsoe trying to single-handedly win despite barely being mobile enough to do a 5 step drop, Terry Allen being signed at like 40 years old as a stop gap at RB, every promising pick we made, defense or offense, either busting out or suffering some sort of freak injury. But we stood strong. Every Sunday as our Dads and Uncles and whoever would crack a beer, we’d sit on the couch and nurse an apple juice and imagine what it would be like to be the Cowboys or the 9ers, and briefly the Packers, Broncos, or Rams.

And guess what? We transcended that. We smashed through that ceiling and now have the two winningest decades in football history. No one can take that away. So as we go into this weekend, watching our boys march in Arrowhead as underdogs. The scarred, outgunned veterans against an army of fast, young warriors, remember that we’ve been playing this very same game for 20 years straight. And we usually win.