Anthony Davis NOT Traded Before Deadline. Lakers Now Salty as Celtics Are Very Much in Play.

Good. I for one am tired of the Lakers just getting superstars in their prime simply because they want them. I have dealt with players not wanting to come to Boston for my entire life because its cold like 9 months out of the year. So for a team in the Pelicans to just flip the bird right in Magic and LeBron’s face brings me great joy.

And now the Lakers are saltyyy.

So I asked @WindhorstESPN if the Pels ever intended to seriously engage with LA on Anthony Davis, or if all the talks & leaks were instead designed to sabotage the young Lakers as revenge for what N.O. sees as tampering, & he said “it’s not just possible, it’s what happened.” 👀 pic.twitter.com/wki2hDPaEs

You can literally hear LeBron’s voice coming through Windhorst’s face with this nonsense. For Windhorst to act appalled that the Pelicans didn’t want to do business with the Lakers is hilarious. It’s a holier than thou take from a tampering franchise because as I said last week there is no more powerful motivator than spite and Anthony Davis’ agent Rich Paul essentially planted a poison pill in the New Orleans locker room a week before the trade deadline after publicly requesting a trade and then leaking reports that Davis only wants to play in LA. If I’m the Pelicans I would 1000% do the same thing. I might even take a lesser deal if I had to purely out of spite rather than gift wrap another superstar in his prime to the Lakers. 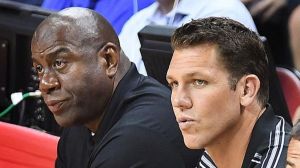 Now as a Celtics fan we’ve heard all kinds of packages and proposals and potential deals. They all make me nauseous because I don’t want to trade Tatum and Smart and whoever the hell else gets thrown in. Buttt, I also didn’t want to trade Big Al Jefferson and look how that worked out for the Celtics. 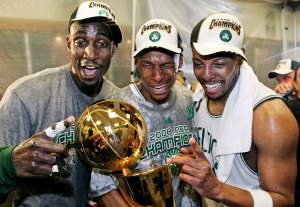 Am I concerned with trading a boatload of assets for potentially one year of Anthony Davis? Absolutely. But I just cannot see how AD could come here and play alongside Kyrie (more on that in a second) and most likely go on a deep playoff run, if not win a title, and then say nah I still would rather go play on a bum ass Lakers team with a LeBron James that is closer to 40 years old than 30. Cannot see it. 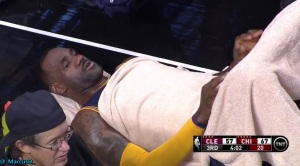 What if Kyrie jets? Well thats your doomsday scenario right there. The Celtics trade a bundle of assets for Davis and Kyrie leaves anyways because then there is a zero percent chance Davis re-signs with Boston to be a part of that lottery team. You’d basically be left with the Time Lord who hopefully could send the team back in time to avoid the entire thing. 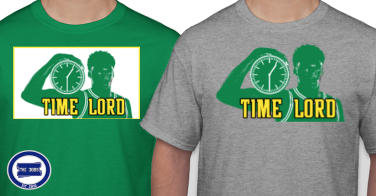 But, I also just cannot see Kyrie leaving. If he wants to be *the* guy, then thats what he has here. From all accounts he wants to play with Anthony Davis too, who is a megastar, yet is a pretty quiet, unassuming guy. 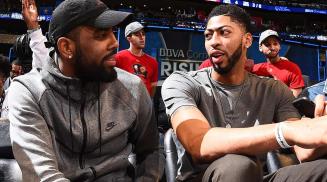 So that would be perfect for Irving; Kyrie would be the man even if he’s not technically the best player on the team. But if he truly wants to be the guy scoring 40 a game, the hands down best player on the team, surrounded by a bunch of deferential no names, then he can be 2006 Paul Pierce on a lottery team somewhere. I don’t think he wants that though. I think he wants to win, albeit his way, but Kyrie wants to win. If the C’s can get AD to pair with him then it locks this team into being a co-favorite to win the NBA title for the next several years. Plus, you would have to be a total sociopath to grab a microphone and announce to a crowd of people that you plan to re-sign with the team only to say PSYCH like 6 months later. I think Kyrie’s council of wise elders would advise him to stay in Boston. 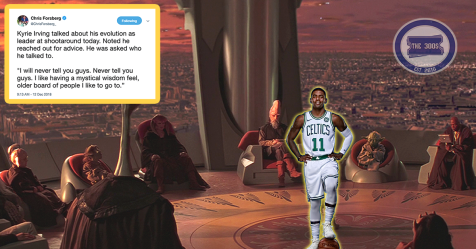 I remain cautiously optimistic at the house of cards our lord and savior Danny Ainge has built.