After a pretty hit-or-miss slate of movies throughout Phase 2, Marvel ended the epoch on a really good note with 2015’s “Ant-Man.”

To be honest, I had no idea what to expect from this one – not only because Hank Pym wasn’t really one of my guys growing up, but even more so because the MCU had my emotions all mixed up at the time. The studio’s second phase started off with clunkers like “Iron Man 3” and the second Thor movie, only to follow that up with two of their best ever in the second Cap movie as well as “Guardians of the Galaxy.” Then, I was absolutely disgusted with “Avengers: Age of Ultron,” which was released just two months before. (Seriously, it has to be my least favorite MCU film. I still think Papa Giorgio was being a bit ambitious with his 5.0 rating.)

Ant-Man was great, though. It truly was. Even though, as I mentioned above, I wasn’t really an expert on the storyline growing up, I was cautiously excited solely for the fact it starred one of my favorite actors/humans ever in Paul Rudd. I may actually love him more than I do some family members, and I can’t remember the last thing I’d seen with him I didn’t enjoy. So good start there. 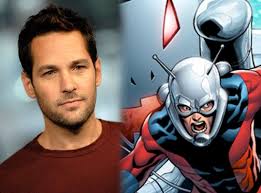 Then, we were also treated to the absolute GEM that is Michael Peña (more on him later). And we also got an extended cameo from Tip Harris – aka T.I. (yes, that T.I.) – along with a star-studded supporting cast that included Michael Douglas, Evangeline Lilly, Judy Greer, Wood Harris, and Bobby Cannavale.

In typical MCU fashion, the movie was obviously going to sprinkle in the funny, especially with guys like Rudd and Peña leading the way. Fortunately, though, it wasn’t overkill. The humor was placed perfectly throughout the story, and I was grinning pretty much the whole film.

As far as the action goes, there wasn’t really any actual “fighting” at all until the very end. But still, there were plenty of unique shots of what life would look like from the perspective of a man the size of a freakin’ thumbtack. For example, here’s what the poor guy had to go through after trying on the suit for the first time and discovering its insane abilities:

And there were plenty of shots like this, too:

Not mindblowing stuff, but pretty cool nonetheless. At least it’s not something you see everyday.

For those who need a refresher on the actual movie itself, here’s a (kind of) quick rundown:

We start off with a flashback to 1989, where we see Hank Pym (Douglas) walking into a small meeting of the minds at S.H.I.E.L.D., which includes Marvel legend Peggy Carter, and we find out that Pym is pretty pissed off after finding out people were trying to replicate his work. Apparently, he had been hiding the secret stuff that allowed him to change his size, because he knew how dangerous the technology could be in the wrong hands. He then resigns and says, “As long as I’m alive, nobody will ever get that formula.” So that’s that.

Back to present day, where we see Scott Lang (Rudd) getting his ass kicked in some sort of weird prison goodbye ceremony, only to then be escorted out of the gates and right into the van of his good pal, Luis. This is where we first see the on-screen magic between these two and are introduced to the comedic genius of Michael Peña, who plays Luis. From the get-go, the dude had me roaring almost every time he was on the screen, absolutely stealing the show at some parts. Peña is pure gold in this one. GOLD.

After getting fired from Baskin-Robbins when his manager discovers his criminal past,  Lang visits Luis’s apartment, where two of  Luis’s buddies, Dave (T.I.) and Kurt, are sitting at the table, looking all shady. Come to find out, they’re interested in having Scott help them with a “score,” a request which Lang immediately rebuffs. Luis then explains to the other two that while Lang is technically an ex-con, he was actually arrested for hacking into a company which stole millions from its customers (called Vista) and somehow distributing the funds back out the deserving folks. Lang then calls himself a “cat burglar” and not a robber, trying to look as non-criminal as possible.

Over to Pym Technologies, where we see a much older Hank Pym, who is apparently no longer running the very company which bears his name. His daughter, Hope van Dyne (Lilly) is also present, along with quite possibly the most douchey character in MCU history, Darren Cross. Apparently, this guy Cross was Pym’s former protégé whom is now responsible for running the company. Cross is obsessed with continuing Pym’s research, which Pym kept hidden from him, and is miffed that he was lied to about the whole Ant-Man thing. Come to find out, Cross was able to get a hold of the formula and introduces his own miniature “hero” idea: Yellow Jacket. He also lets Pym know about his plan to sell the technology to those who want to create an army of miniature super soldiers.

Sure, he was an A-hole, but that suit is DOPE.

Pym tries to reason with Cross not to pursue the tech any further, and he especially warns against selling it as a weapon. Cross doesn’t care, some even more douchey guys with money show up, and Pym’s not a happy camper. However, apparently he and Hope, who serves as Cross’s second hand, have been conspiring to stop Cross behind his back for a while now.

We then see Lang show up to his daughter’s birthday party, an event at which he is NOT welcome by anyone besides his disgustingly adorable daughter. Not only is he being shunned for being an ex-con, but he also realizes he needs money, and he needs it fast. At which point, he goes back to Luis’s place to ask about that “score.”

Cue the first hilarious Peña rant recap of the movie:

Lang accepts, and they go to rob the house. Come to find out, though, they’re not robbing a safe full of money – and even more importantly, they’re not just robbing any old house. Once Lang breaks open the safe, which is actually a room, we see the Ant-Man suit sitting there, which he quickly grabs and books it out of the house. We also then see a shot of good old Pym watching Lang rob his house, which seems a bit odd at first.

I already showed you what happens when he tries on the suit, which causes him to go right back to Pym’s place and “return it.” Upon leaving the house, who else is there but the cops, right? Boom. Back to jail for Mr. Lang.

OK, we’re getting a bit long here, so time for a Peña-style recap of the next chunk of the film:

During this time, we also see Cross discover how to finally shrink organic matter without killing it. So that’s not good. And we get to see Lang fight Falcon when attempting to steal a piece of tech from the Avengers facility:

Lang also convinces Luis and the boys to help them with their plan. We also find out that Pym has been keeping Hope away from danger the whole time after losing her mother Janet (aka the original Wasp) in a mission years ago. And this is actually super important. Apparently, in order to diffuse a Russian (because of course) bomb, she had to shrink down to sub-atomic levels and enter the Quantum Realm, which had never been done before. Pym says it’s “a reality where all concepts of time and space become irrelevant as you shrink for all eternity.” He never saw her again and has spent his life trying to get her back. (He had previously been lying to Hope and saying it was a plane crash that killed her mother. *Cue heartwarming father-daughter healing scene.*)

And off to Pym Technologies…

A lot of stuff happens inside and outside the facility, everyone escapes (including Cross), and the building itself basically implodes as everyone is getting away. Lang follows Cross, who throws on the Yellow Jacket suit and becomes super tiny himself, all the way to Lang’s daughter’s house.

As Cross is holding Lang’s daughter hostage, Lang decides to take the leap and go sub-atomic to get inside the Yellow Jacket suit and destroy Cross. He’s able to do so, but he also almost gets stuck in the Quantum Realm forever. Lo and behold, he finds a way out, and with both Cross and the tech destroyed, the movie is basically over. (Pym also walks in on Lang smooching with Hope at the very end, setting up the future of the franchise. The first post-credit scene also has Pym showing Hope the Wasp suit he’s been hiding in the basement for years. SPOILER ALERT: She becomes the new Wasp.) Again, I had a blast watching this one the first time, and I had almost just as much fun watching it again. Rather than making it your typical “good guy vs. bad guy” cookie-cutter super hero flick, the MCU seemed to be more interested in creating an origin story that was simultaneously a redemption story for a new and really fun character.

Kudos to Feige and Co. on this one.