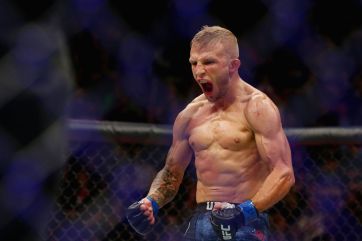 ESPN – TJ Dillashaw is no longer the UFC bantamweight champion.

Dillashaw (16-4) announced Wednesday morning that he has “voluntarily relinquished” the UFC’s 135-pound title after he was informed by the New York State Athletic Commission and the United States Anti-Doping Agency of an “adverse finding in a test taken for my last fight.” ESPN confirmed the validity of the statement via multiple sources.

Ever heard the one about the guy who went to New York to claim two title belts and came away with none? Holyyyy shit. To quote one of my favorite movies – because I have an intimate knowledge of movies despite not being featured in movie-related podcasts – “Lock, Stock, and Two Smoking Barrels” (1997): “A minute ago this was the safest job in the world. Now it’s turning into a bad day in Bosnia.”

The plan for “Killashaw” was to drop into the City That Never Sleeps, woop Henry Cejudo for the Flyweight Championship, and go go back back to Cali with both the 125lb and 135 lb belt around his waist. Not only did he get stopped by Cejudo that night in January, but the NYSAC has suspended him for a year retroactive to his fight in January and (twitter tells me) fined him $10,000.00 for testing positive for something illegal. Not a fantastic look. Taking a page out of the Michael Scott School of Getting Ahead of the Story, Dillashaw has chosen to relinquish his title rather than be stripped. After thinking on it I like that move. I could have seen him forcing the UFC to strip him or watch other 135ers battle for the interim title, belittling them from the interwebs as they do so. He went the high road here.

As for his legacy, well it’s complicated, as it always is nowadays. Cody Garbrandt once claimed Dillashaw was “on everything” and one look at Tyler James’ own posted photos of all the supplements he takes and it suddenly is not a surprise GNC Icarus flew too close to the sun. I mean at what point does whether or not you knew you were taking something quote on quote “illegal” not matter when you are shoving everything possible down your gullet to improve your performance past your natural skills and abilities, born with and learned? And this is not meant to be an argument for or against ‘roids, I’m just saying, as another one of my favorite movie quotes goes – because I really do enjoy movies – from “Four Brothers” (2004), “You keep knocking on the devil’s door long enough and sooner or later someone’s gonna answer you.” Basically Dillashaw burned the candle at both ends.

The division itself is now without its biggest star but is STACKED with talent. You have Marlon Moraes and Aljo Sterling, a rematch between the two of whom should be the next title fight. Behind them you have guys like Pedro Munhoz, fresh off a KO of former champ Garbrandt, and phenom Petr Yan ready to ascend. Hell, with the King out of the way maybe there still is a chance for longtime bridesmaid Rafael Assuncao, just off a wayyyyyyyy too long awaited No. 1 Contender’s fight loss to Moraes, to rise up and get the title shot he’s so sorely waited for.

The long and the short of it is that Dillashaw definitely screwed up here and that is both bad for his career and the UFC, with its perpetually yo-yo’ng number of bankable stars. However in a sport that waits for no one and where timing is everything, the always exciting bantamweight division is ready to pick up the slack.