A Dialogue On a Manufactured High School B-Ball Team 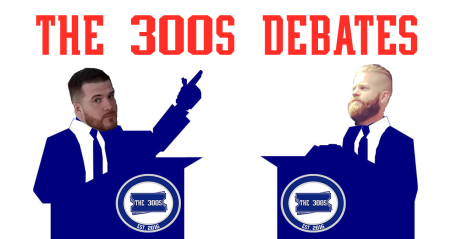 Joey B and Red react to the news that LeBron James and Dwyane Wade will both have their kids transferring to the same high school to play ball together. Time really is a flat circle, huh?

To kick things off, where on the scale of Jonathan Moxon’s Dad – Stage Parents do Bron and Wade fall here in terms of winning vicariously through your, in this case, high school basketball player?

This is simply LeBron reading all of my criticisms of him and the NBA at large for its way too chummy AAU culture and doubling down on the death of competition. Where’s the killer instinct? Idk maybe its because I was always the smaller, less skilled, underdog on all my teams, but I would much rather be leading my hometown public high school to a state title than teaming up with a bunch of other rich kids to go 82-0. Its not like LeBron Jr. needs the exposure for recruiting either!

Joey B:
Ya you make a good point. What is there really to be gained by going undefeated and beating these teams with 6’1 Centers 148-26? It’s like Bron shot DWade a “hey know what’d be fun text?” text and DWade didn’t have the heart to say “…why?” (There was no way this was Wade’s idea).It’s insane that this concept has trickled down to H.S sports though. Whose next? Would you want to see Matt Stafford Jr. chuckin to Megatron III?

Red:
At least LeBron Jr. didn’t get completely cucked like his dad and transfer to D Wade’s son’s school. But this is how Hollywood became a thing. All the best of the best just moved to one part of the world and claimed it for themselves as the entertainment capital. Sounds great right? Except when it creates a gigantic bubble of entitlement and they’re all worse off for it. Learn some adversity guys, it’ll help you in the long run.

Joey B:
Haha totally. It’s almost like Lebron and Wade are becoming a two-headed Lavar Ball. Our sons are playing TOGETHER. In HIGH SCHOOL. Then in COLLEGE. Then in the NBA.

It would be hysteeeeeeerical if either/or/both didn’t pan out and they ended up on the fringes of Lithuanian professional basketball.

Red:
Man not to go off in a completely different tangent, but Lavar Ball is a FORCE of nature. The man just speaks things into existence. He predicted his son would get drafted by the Lakers, he predicted on Colin Cowherd’s show the dumpster fire we’re seeing with Magic and the Lakers now, and he even had me believing all three sons would play in the NBA together. Well once the Big Baller Brand shoe company imploded I had to take a step back, but you just know Lavar will not stop. As a marketing man, I respect it.

Anyways, way to put mountains of pressure on your kids guys. I don’t really know how good these kids are supposed to be so I could be totally wrong here, but just look at Michael Jordan’s son, who’s name is Jeffrey Michael Jordan by the way because MJ is a fucking psychopath. He played at Central Florida and was never going to live up to his dad’s legacy, but at least MJ didn’t shine a goddamn light on the kid just waiting for him to fail in front of millions of people.

Joey B:
Lavar Ball is a categorical piece of shit. /thread.

But in general, even if the kids are supported and nurtured in the right way, imagine the pressure. I mean look what happened to Vince Wilfork’s kid (not linking to it out of respect, you have google). Even if the parent does everything right, if they were a fucking superstar it cannot be easy trying to grow and thrive in that shadow. Hence why really not a lot of start athlete’s kids have made it.

I can think of Prince Fielder and the Long brothers….and that’s it. Kind of a startling statistic.

Red:
I’ve read rumors about how LeBron wants to play until he’s 40 because it would give him the opportunity to play with his son, assuming he’s actually good enough to reach the league. Sort of like Ken Griffey Sr. playing with Ken Griffey Jr. and hitting back to back bombs. I’m not a huge LeBron fan obviously, but it would be pretty cool to see an old ass LeBron Sr. throwing an alley oop dunk up for LeBron Jr.

Joey B:
Yaaaa I can’t stand him and even I have to admit that’d be pretty cool.

Speaking of which zero percent chance Vlad Jr.’s team couldn’t do with a cannon armed outfielder off the bench. Maybe Sr. can’t hit anymore but they still could be on the field at the same time COME ON.

Red:
Love Vlad, but he aged like a can of beer in my trunk. Guy was hobbling around like he was on stilts by his early 30s.

TLDR; Moral of the blog? Have professional athletes for parents and you’re golden!

Joey B:
Or emotionally damaged beyond repair.